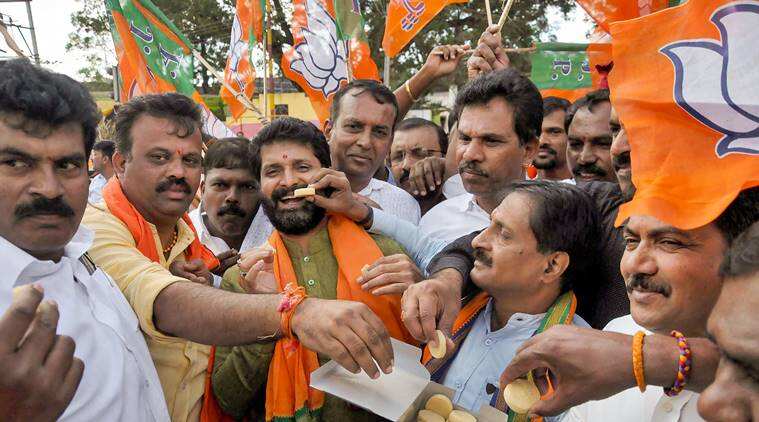 Bengaluru: In a reversal of trend, opposition Congress overtook ruling Bharatiya Janata Party (BJP) in Karnataka’s Belgaum Lok Sabha seat where counting is in progress on Sunday for the bye-election held on April 17.

According to the Election Commission website, Satish Jarkiholi of the Congress was ahead with 2,75,375 votes over BJP’s Mangala Angadi, who secured 2,63,474 votes in the latest round of counting.

Jarkiholi secured 44.05 per cent vote share, while Mangala got 42.11 per cent of votes so far.

Belgaum is about 500km northwest of Bengaluru in the southern state.

The by-election was held to fill the vacancy caused by the death of Union Minister of State for Railways Suresh Angadi in September 2020.

BJP’s Angadi held Belgaum parliamentary seat for the fourth consecutive term since 2004. Satish, 58, is a legislator from the Yemakanmardi Assembly seat in the border district of the state.

In Basavakalyan assembly seat in Bidar district, BJP’s Sharanu Salagar was ahead with 15,052 votes over Mala B Narayanrao of the Congress, who secured 7,900 votes, as counting advanced.

The vacancy in Basavakalyan was caused due to the death of Congress legislator B. Narayanrao due to Covid in September 2020. Mala is the widow of Narayanrao.

In Maski (ST) reserved assembly segment in Raichur district, Congress candidate Basanagouda Turuvihal was leading with 50,400 votes over BJP’s Pratap Gouda Patil who secured 31,595 votes even as counting is underway.

Vacancy in Maski was caused due to the disqualification of Patil, when he was with the Congress before he defected to the BJP in November 2019.

Interestingly, Turuvihal lost to Patil in the May 2018 assembly elections as a BJP candidate. He joined Congress recently to contest on its Hand symbol against Patil.

Vote count in all the 3 constituencies is being held amid tight security and under the Covid-induced safety guidelines to ensure social distancing.