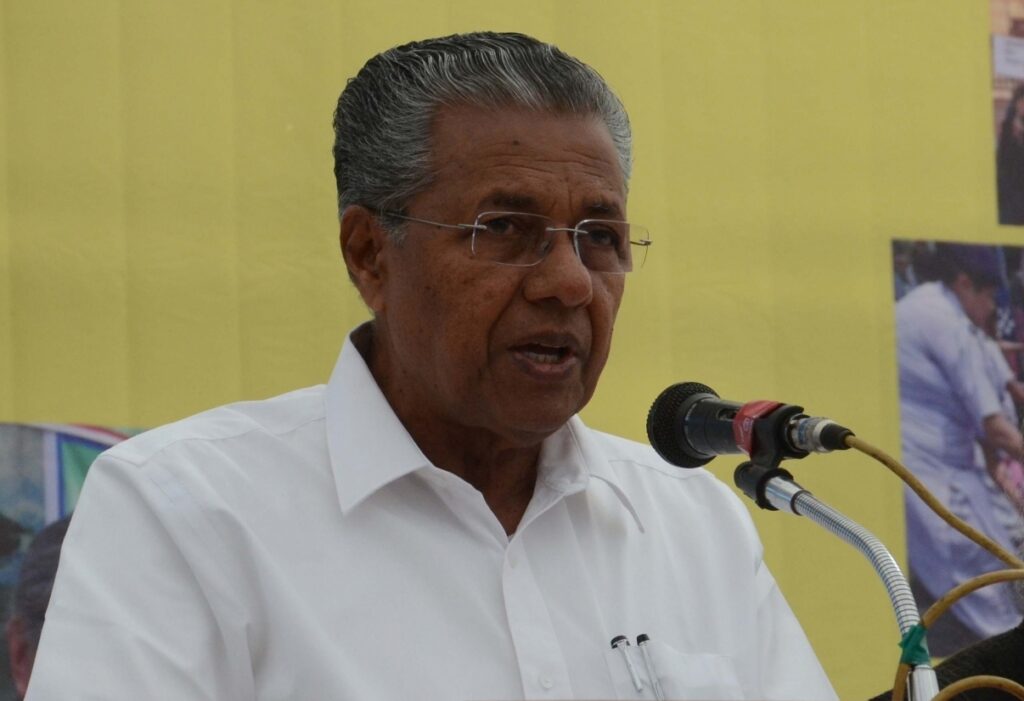 Thiruvananthapuram, Kerala Chief Minister Pinarayi Vijayan on Monday urged people to maintain absolute caution as variants of the UK and South African virus have been identified in the state.

“We have been told that the UK and South African variant virus have been reported in April. Of the total cases now detected, 40 per cent are from these variants which includes 30 per cent of the UK strain, while 7 per cent is the double mutant strain and 2 per cent is the one from South Africa,” he said after an all-party meeting here.

On Monday, 21,890 people tested Covid positive after 96,398 samples were sent for testing and as a result, the total active cases in the state have reached 2,32,812 – the highest-ever so far.

“Since the situation is serious, the all-party meeting decided to ensure that across the state, all public places like gymnasium, bars, clubs, pools, indoor stadiums and movie halls should close down. The number of people attending marriages should not exceed 50 and for funerals not more than 20. At no cost should there be any laxity on the part of people as things are grave,” said Vijayan.

“We are told that there is going to be a shortage of blood and hence we request all those below 45 to see if blood can be donated. We say this because from May 1, those in the age 18 to 45 will also be eligible to take vaccines. According to medical experts, those who take the vaccines can donate blood only after 30 days and hence, we request as many such people to donate blood and then take the vaccine,” he added.

Vijayan pointed out that the situation is so grave because soon after the local body polls in December last year the daily number of cases reached 2,000 and the test positivity rate reached 11 per cent.

“In March, the TPR came down below 3 per cent, but things went haywire and now the TPR stands in the range of 20 per cent. We have decided to open a control room for migrant workers and they are best advised to be where they are,” he said.

On vaccinations so far, he said so far 57.58 lakh people have taken the first dose, while 10.39 lakh have taken both the doses.

“Now, we have a problem as our request to the Centre to supply us another 50 lakh doses is yet to receive a response. We will continue to ask the Centre, even as we are making all efforts to procure the vaccines as asked by the Centre from the manufacturers,” said Vijayan.

On Monday, a mammoth crowd had gathered at a state-run vaccination camp in the capital city, throwing all the mandatory social distancing protocols to the winds.

“It has now come to a stage that these vaccination centres will turn into Covid distribution centres, as such was the crowd… it was absolute mayhem,” said an angry citizen who was waiting for long.

But authorities said that every person was given a time and the rush took place because people turned up much before their allotted time.

Among the other things that were discussed at the all-party meeting include a wait and watch policy with the present protocols which include the present night curfew from 9 p.m. to 5 a.m. There was also consensus on continuing with the semi-lockdown protocols that came into force every Saturday and Sunday, when only shops selling essential items will open and all others will remain closed, besides private transport vehicles also will not be allowed and all have to remain indoors.

Also it has been decided that there will be no celebrations on May 2, which is the counting day.

“Only officials, representatives of the candidates and the media will be allowed at counting centre and all will have to produce a RTPCR test result or should have taken both the doses of vaccine,” added Vijayan.