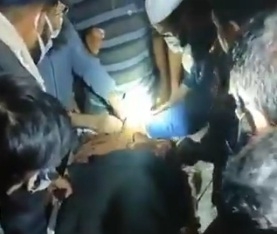 Srinagar : To dispel rumours about the alleged desecration of senior separatist leader, Syed Ali Geelani’s body, Jammu and Kashmir Police have posted video clips of his burial during which all Islamic rites were observed.

Video clips posted by the police have shown that the body of Geelani was given proper ablution, was wrapped in white shroud and lowered into the grave amid recitation of verses from the holy Quran.

This has scotched rumours spread around which said after taking the body into possession from the family members, police did not observe religious rites during the burial of the senior separatist leader.

Police has clarified that in order to maintain law and order, the family of the late separatist leader was approached with the request that it would be in the best interests of peace and tranquility if Geelani was buried in the morning.

“Geelani’s two sons agreed to our request, but later probably under pressure from Pakistan the family members tried to shout slogans and create a ruckus when preparations were being made for the burial of the separatist leader”, police sources .

Meanwhile, police have registered an FIR under the prevention of unlawful activities act against members of Geelani’s family for wrapping his body in the Pakistan flag and shouting anti-national slogans.

Authorities had imposed wide restrictions and suspended mobile telephony and Internet facilities in the Valley in the aftermath of his death.

Situation throughout the Valley has now returned to normal and the attendance in government offices, banks and educational institutions is also normal, authorities said.