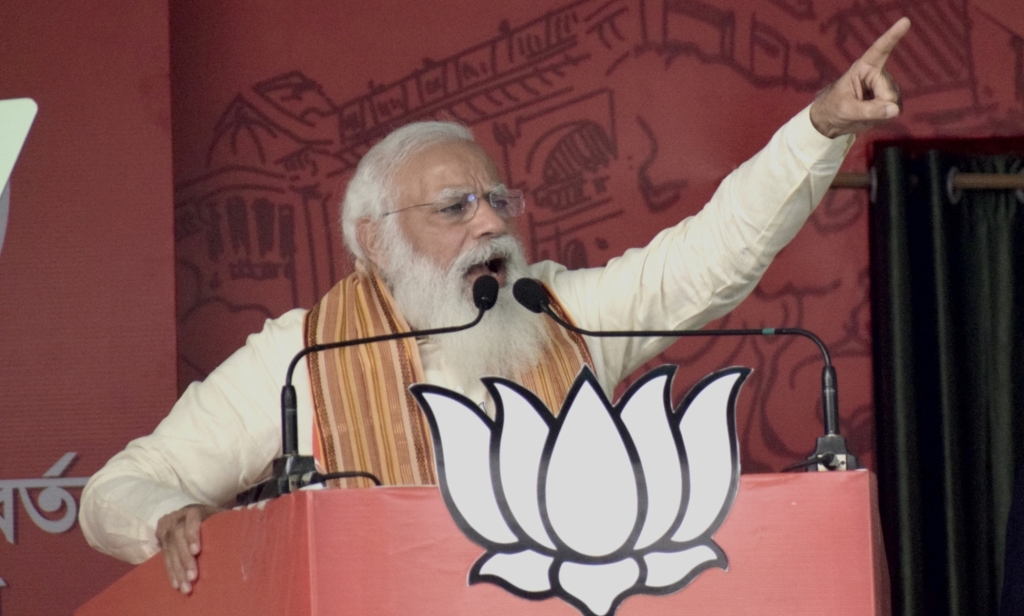 Kolkata, Launching a blistering attack on chief minister Mamata Banerjee, Prime Minister Narendra Modi alleged that the Trinamool Congress supremo has an old habit of doing politics with dead bodies and she is trying to do the same with the unfortunate death of five people at Sitalkuchi in Coochbehar on April 10.

The Prime Minister was perhaps referring to the audio clip that the BJP released on Friday that had an alleged ‘conversation’ between Chief Minister Mamata Banerjee and the Trinamool Congress candidate of Sitalkuchi Partha Pratim Ray, where a female voice, purportedly of the chief minister, is heard asking “Partha” to “keep the bodies so that the party could hold a rally with the dead”. It is then heard asking the Trinamool candidate “to tell the families not to take the bodies home”.

Later, at a rally in Gangarampur, giving a detailed chronology of the abuses the chief minister has used against him, PM Modi said that the Trinamool Congress chief’s politics is not limited to just “protests, but it has crossed a dangerous limit of vengeance. After four phases, TMC is broken to pieces and ‘Didi, bhatija’ will be vanquished after eight phases of elections (are completed),” he said.

The Prime Minister further asserted that the BJP government, if voted to power, will work for the aspirations of the people of Bengal. He alleged that Chief Minister Mamata Banerjee has stood as a wall between West Bengal’s people and central welfare schemes, depriving them of benefits.

Modi also slammed Banerjee for skipping several meetings called by the Centre to discuss many key issues, including two recent meetings over the emerging Covid-19 situation in the country. “The Central government has convened meetings to discuss several topics many times, but didi does not attend these meetings citing some or the other reason,” he said.

“This region has the potential to become the industrial centre of India for a long time. From cycle to rail, from paper to steel, from aluminium to glass – people come from all across India to work in these factories. People used to come here for employment but today people from here are migrating. Didi, who speaks of Ma Mati Manush, has spread ‘mafia raj’ here,” he said in Asansol.

Speaking in Gangarampur he said, “After May 2, I assure that all the farmers would get their dues. The farmers were deprived of their legitimate claim because ‘Didi’ stopped us from giving your due. Once we come to power, we will send 18000 rupees to the accounts of the famers. We will make every effort to make this place an international trading hub,” he added.