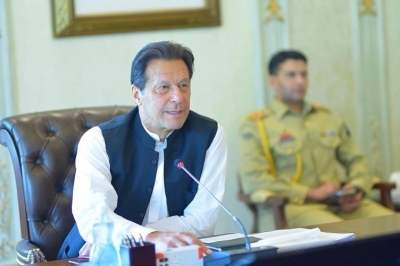 Islamabad, Former Pakistan Prime Minister Imran Khan, who was voted out of the top office last month via a no-confidence movement which he alleges was masterminded by the US through the help of local players over his pursuance of an independent foreign policy, made these remarks while addressing overseas Pakistanis in a video message, Dawn news reported.

He said that the US wanted bases in Pakistan in order to “conduct (counter attacks) from here in case if there were any terrorism in Afghanistan”. something he said he found “absolutely unacceptable”.

Khan said Pakistan had already lost 80,000 lives in the US-led ‘war on terror’ and still its sacrifices were never appreciated, with many US politicians blaming it instead.

“First they blamed us, then they didn’t appreciate us, our country and tribal areas were destroyed and now (they) are again asking for bases. I would have never agreed to this and the problems (between us) started from there.”

Khan, in an interview in June 2021, had categorically said that Pakistan would “absolutely not” allow any bases and use of its territory to the US for any sort of action inside Afghanistan, Dawn reported.

His latest comments were similar to the ones he made in a recent podcast where he said that the US was “asking for bases here to stop international terrorism in Afghanistan”.