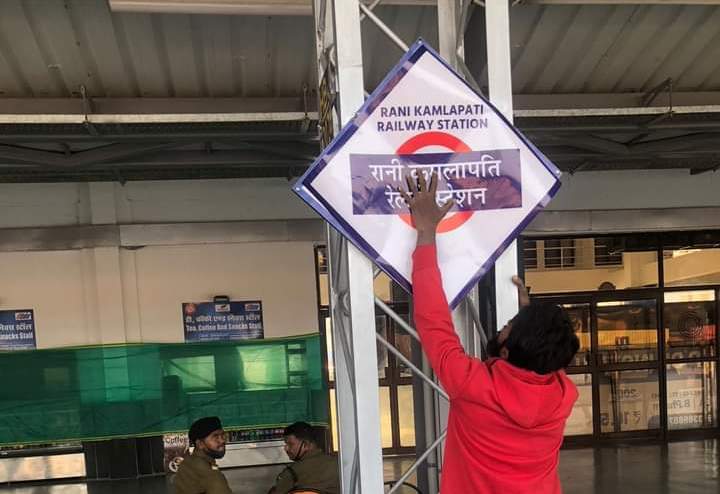 In a letter addressed to Union Home Ministry, the Shivraj Singh Chouhan-led state govt on Friday had appealed to change the name of Habibganj railway station.

After getting approval from the Centre, the Shivraj Singh Chouhan led state government has started replacing boards of ‘Habibganj Railway Station’ with ‘Rani Kamlapati Railway Station’, via an order in this regard issued on Saturday.

It came just one day ahead of the visit of Prime Minister Narendra Modi to attend the ‘Janjatiya Gaurav Divas’ on November 15, during which he will also inaugurate the renovated railway station.

However, eyeing the next assembly elections in 2023, Chouhan instead chose Rani Kamlapati, who is considered the last Hindu queen of Bhopal.

On the birth anniversary of tribal freedom fighter Birsa Munda on November 15, Prime Minister Modi and Chief Minister Chouhan will address a mass gathering of tribal communities, and will announce several schemes focusing on tribals.

Birsa Munda’s birth anniversary is being celebrated as ‘Janjatiya Gaurav Divas’ on November 15.

The move is seen as an attempt to please Hindu voters, especially in the tribal communities. In the last assembly polls in 2018, the BJP had managed to win only 15 seats against the Congress’ 36 here.

The renaming of the Habibganj railway station will now follow the league of the Allahabad railway station and Mughalsarai railway station whose names have now been changed to Prayagraj and Pt Deen Dayal Upadhyay Junction respectively. The project has been redeveloped at a cost of Rs 100 crore.

Chouhan in a statement expressed his gratitude to PM Modi for the renaming of the world-class station after Tribal queen Rani Kamlapati. CM Chouhan while thanking the PM hailed Rani Kamlapati as the pride of the Gond community and the last Hindu queen of Bhopa. The transport department also notified that renaming the Habibganj Railway Station was in line with the Centre’s decision to celebrate ‘Janjatiya Gaurav Diwas’ on November 15 – in the remembrance of tribal leader and freedom fighter Birsa Munda.