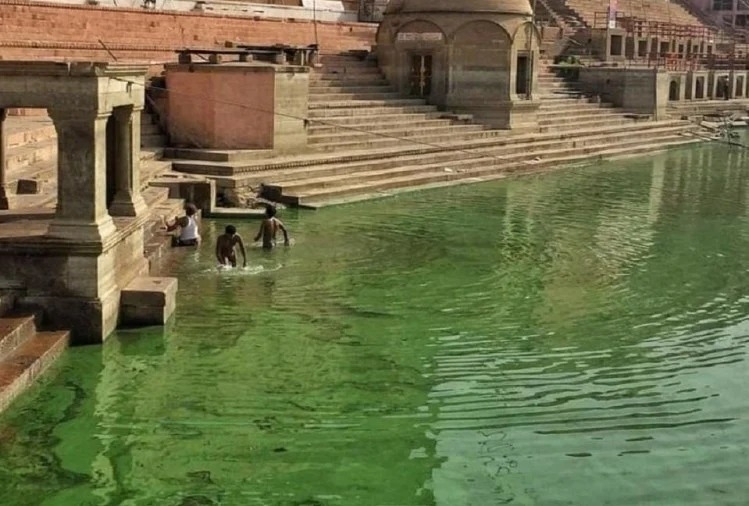 Varanasi: It has been a few days since the colour of the Ganga river in Varanasi turned green – and not exactly with envy.

The change in the colour of the water has become a major cause of concern for the local people – more so, because in the same period last year, during the first wave of the pandemic, the Ganga water had become sparking clean, mainly due to less pollution.

According to Dr B.D. Tripathi, the chairman of Malviya Ganga Research Centre at Banaras Hindu University, the greenish appearance of the river could be due to microcystis algae.

“They can be found in flowing water. But it is generally not seen in the Ganga. But wherever the water gets stopped and the condition for nutrients is created, microcystis begin to grow. Its specialty is that it grows only in the waters of ponds and canals,” he said.

According to scientists, the water can turn toxic and needs to be checked if the greenish colour prevails longer.

Environmental pollution scientist Dr Kripa Ram has said that the algae are seen in Ganga due to increased nutrients in the water. He also cited rain as one of the reasons for the change of colour of Ganga water.

“Due to rain, these algae flow to the river from fertile lands. After getting adequate nutrients, they start the process of photosynthesis. If the water remains still for long, then only the sun’s rays can go deep, enabling photosynthesis.

Phosphate, sulphur and nitrate are the nutrients that help the algae grow. The nutrients can also come from agricultural land and sewage,” he explained.

The scientist said that there was no need to worry. It is a natural process and generally happens between March and May. However, since the water turns toxic, bathing in it can cause skin diseases and drinking it can harm the liver.

The local residents, meanwhile, claim that this is the first time that the Ganga has turned ‘so green’.

“Almost the entire river has changed colour and a foul smell is emanating from the water. Samples of water must be thoroughly tested before scientists come to a general conclusion,” said Ajay Shankar, an octogenarian.