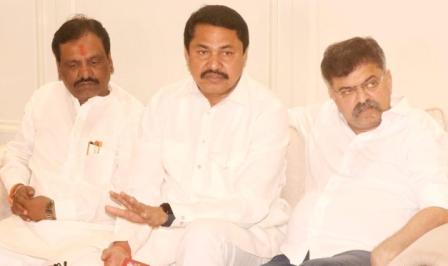 Mumbai : Ending a long bout of suspense, the opposition Maha Vikas Aghadi (MVA) broke the stalemate over two crucial seats in the January 30 biennial elections for the Maharashtra Legislative Council, here on Thursday.

The trio of Congress, Nationalist Congress Party (NCP) and Shiv Sena (UBT) formally declared that the MVA will support Independent candidates Shubhangi Patil in the Nashik Graduates’ constituency and Sudhakar Adbale in the Nagpur Teachers’ constituency.

The decision was taken at a joint meeting of the MVA allies before it was announced to the media.

While Shubhangi Patil is backed by the Sena (UBT), Sudhakar Adbale enjoys the backing of Congress. Both will now be officially supported by the MVA.

Dismissing the allegations levelled by the ruling Balasahebanchi Shiv Sena-Bharatiya Janata Party (BSS-BJP) leaders that the MVA is faction-ridden and its leaders don’t see eye-to-eye, Patole said that “there is complete coordination and proper understanding among the three opposition allies”.

The MVA leaders also slammed the BJP on major issues confronting the country like spiralling inflation, growing unemployment and resentment on other counts, besides accusing the saffron party of breaking other parties and backstabbing to grab power. It warned that the people of the state “will now teach them a lesson”.