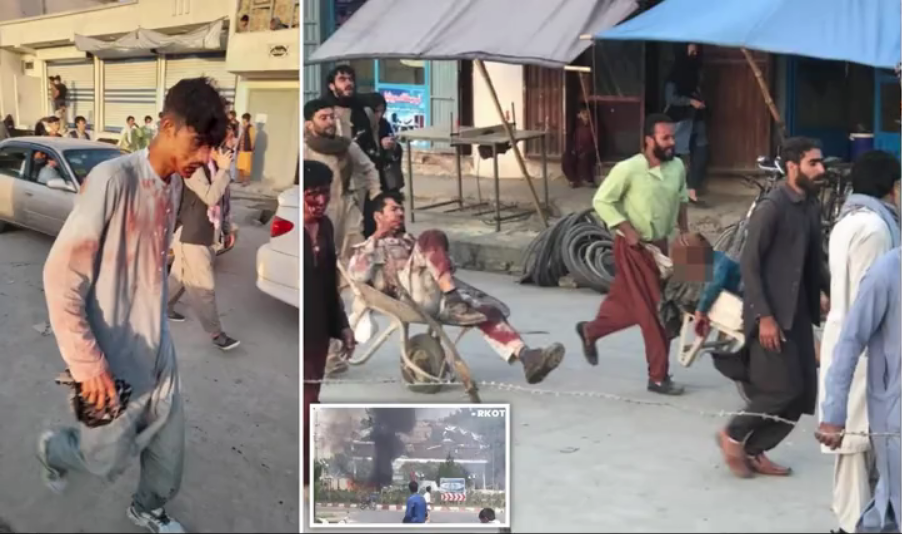 Sources in the Afghanistan health ministry said that at least 40 people, including women and children, were killed and 120 others, including Taliban guards got injured in the blast. The prime suspect for the suicide attacks at Kabul airport on Thursday is the Islamic State affiliate in Afghanistan known as Islamic State Khorasan Province (Isis-K or ISKP), The Guardian reported.

Kabul: A blast at the Kabul airport, which is thronged by crowds of desperate Afghans seeking to flee the country after the Taliban takeover, on Thursday, followed by one at a nearby hotel, where processing of refugees takes place, caused numerous casualties, including US troops.

“We can confirm that a number of US service members were killed in today’s complex attack at Kabul airport. A number of others are being treated for wounds. We also know that a number of Afghans fell victim to this heinous attack.

“Our thoughts and prayers go out to the loved ones and teammates of all those killed and injured,” Pentagon Press Secretary John Kirby said in a statement. US media said that at least four marines were killed.

Earlier, in a tweet, Kirby said they could “confirm that the explosion at the Abbey Gate was the result of a complex attack that resulted in a number of US and civilian casualties. We can also confirm at least one other explosion at or near the Baron Hotel, a short distance from Abbey Gate”.

A Taliban leader said that at least 11 people, including women and children, were killed, and a number of Taliban guards got injured in the blast, the BBC reported.

Pictures off the spot showed a pile of bodies and some reports put the number of dead as high as 40, but there was no official confirmation.

The airport blast was said to have taken place outside one of the airport gates where British and US troops are stationed to oversee the evacuation process. It is suspected to be a suicide attack.

The UK Defence Ministry, however, denied any casualties.

“There have been no reported UK military or UK government casualties following the incidents in Kabul. UK forces are working closely with our partners to provide security and medical assistance,” it said in a tweet.

The Taliban condemned the twin blasts in an area, which they noted, was under the control of the US military.

“The Islamic Emirate strongly condemns the bombing targeting civilians at Kabul airport,” spokesman Zabihullah Mujahid said in a tweet, adding that the blasts “took place in an area where US forces are responsible for security”.

Another spokesman Suhail Shaheen said the Taliban are “paying close attention to the security and protection of its people”.

Evacuated Afghan journalist Bilal Sarwary said in a tweet that the blast took place at a sewage canal where Afghans were vetted.

“A suicide attacker blew himself up in the middle of a large crowd. At least another attacker started shooting, multiple eye witnesses in the area & a friend tell me,” he said.

British Conservative MP Alicia Kearns, a member of the foreign affairs and national security strategy committees, said that “many were hurt” in an attack near the Baron Hotel, where the UK is processing Britons and Afghans eligible for evacuation.

“A bomb or attack with gunfire at northern gate of Baron’s Hotel. Worried this will devastate evacuation – so many hurt. My heart is with all those injured and killed,” she said in a tweet.

The attacks came amid warnings by the western nations of a terror strike at the airport as evacuation of foreign citizens continues.

However, British Prime Minister Boris Johnson asserted that the operation to evacuate British nationals and eligible Afghans will continue despite the deadly explosions.

“It is not going to interrupt our progress, we are going to get on with this evacuation,” he said after chairing an emergency meeting on the bombings, the BBC reported.

“There were always going to vulnerabilities to terrorism and opportunistic terrorist attacks, we condemn them, I think they are despicable, but I am afraid they are something we had to prepare for.”

French President Emmanuel Macron said that the situation has “profoundly deteriorated” in Afghanistan.

He said the situation surrounding Kabul airport is now “extremely tense” but despite the attack, France intended to continue its evacuation operation, as long as a safe environment could be guaranteed.