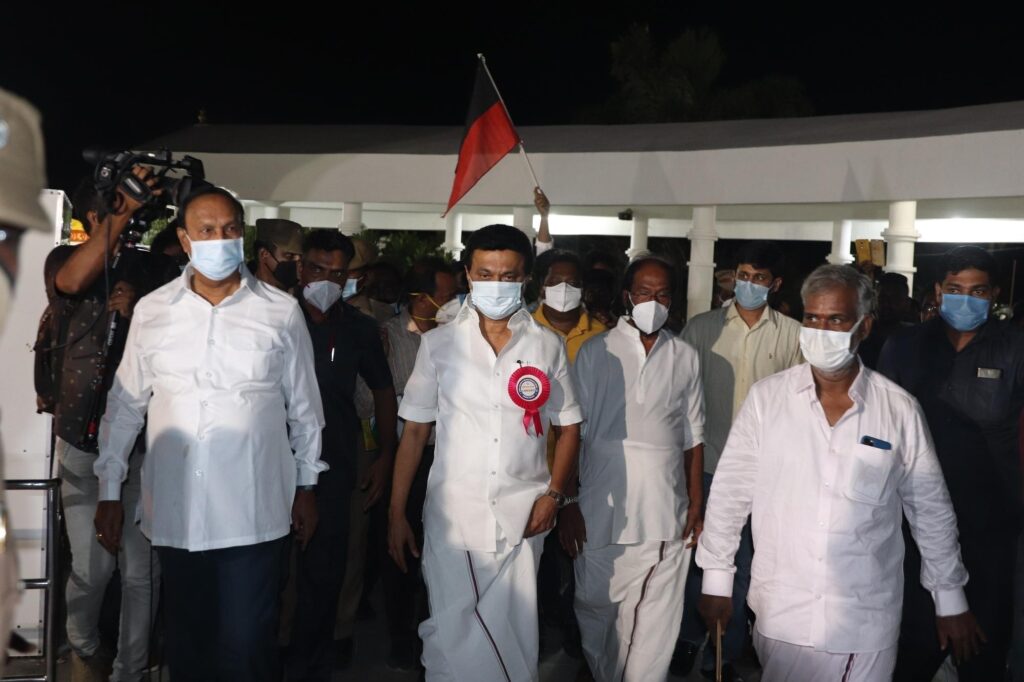 Chennai, With the DMK winning Tamil Nadu Assembly elections after crushing the AIADMK-led front, and M.K. Stalin set to become the Chief Minister, the cult politics, which had subsided after the passing away of M. Karunanidhi and J. Jayalalithaa, may as well return.

After M.G. Ramachandran, a matinee idol and superstar of Tamil Nadu entered the state politics, the cadres and sympathisers found in him a new messiah. He was adored and worshipped just like he was in the movies and there were jokes going round in Tamil Nadu that ‘if MGR was found falling down during a fight scene in a Tamil movie, the spectators would throw knives at the screen so that MGR could use them and win the fight’. While this may be a joke, the point of adoring MGR as a Tamil icon and saviour of Tamil Nadu was clear. When MGR split the DMK and formed his own party, the AIADMK in 1972, the fans followed him and he won the elections with a comfortable majority.

M. Shivakumar, a political analyst and a former journalist with a Tamil news paper of Madurai , “While Periyarr and Annadurai gave the ideological moorings to the Dravidian politics in Tamil Nadu, MGR raised it to a cult status and he was adored and worshipped across the spectrum and his movie fans moved on with him as his political fans and there started the cult worship in Tamil politics.”

Karunandihi, one of the best lyricists and writers of Tamil Nadu politics had a special gift of the gab and his oratory skills had kept the audience spellbound. He was also worshipped and adored within and outside the Dravidian politics even though the ideology was rationalism.

MGR had carefully picked Jayalalithaa, his one time pair in filmdom as his political successor. But after his passing away, Jaya was kicked out of the party and even from the funeral procession of her mentor. However, Jaya bounced back and became a powerful Chief minister with a huge fan following. She, as Chief minister took the cult politics and image of invincibility to a higher level and even ministers and senior party functionaries were seen prostrating at her feet in public domain. This was considered as a privilege by the political supporters and Jayalalitha silently supported this.

After the passing away of Jayalalithaa and Karunanidhi, the cult politics of Tamil Nadu had taken a back seat and both Palaniswami and Panneerselvam were ordinary leaders who were accessible to the general public, bureaucracy and party office bearers.

However, after the DMK captured power in Tamil Nadu with a sizeable majority and M.K. Stalin is set to become the Chief Minister, the politics of cult worship will find an entry to the political firmament of Tamil Nadu as he has the aura of the political dynasty of Karunanidhi which is being worshipped by the cadres and leaders of the DMK.

C. Rajeev of the Centre for Policy and Development Studies, a think tank based out of Chennai while speaking said, “With Stalin coming to power, the DMK cadres and leaders will commence the worship culture again which will ultimately lead to cult worship. If Stalin does not fall into this trap and stick to his business of administering the state, there can be a respite but the culture of this politics is not easy to be erased and there is every likelihood that cult politics will continue in the state.”