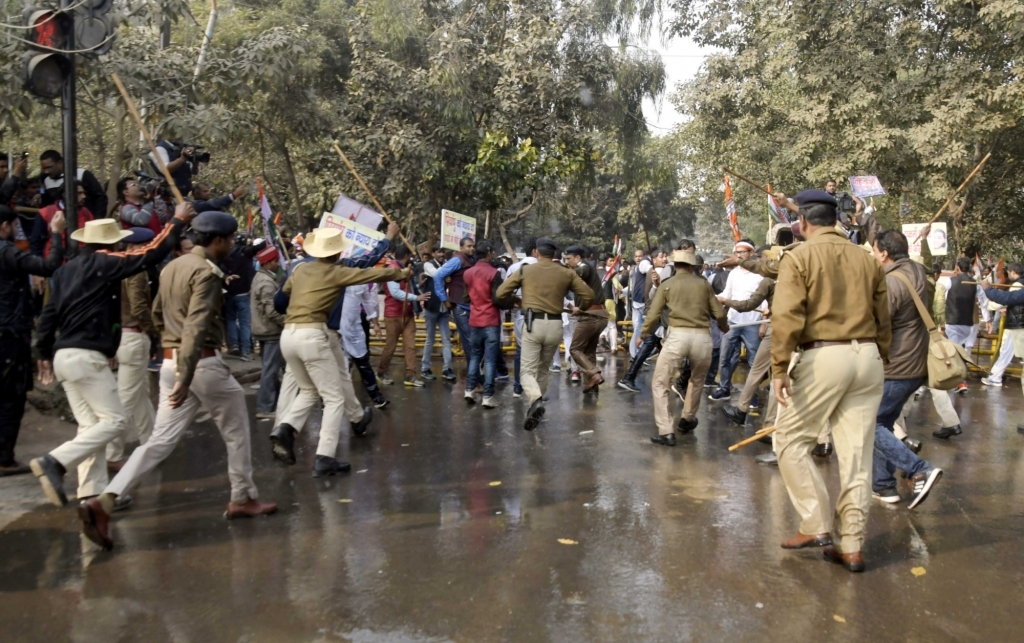 Indore : The Indore police on Wednesday lathi-charged protesting Congress workers who were demanding permission for political rallies and lifting of the ban on public celebrations of the upcoming Ganesh festival. When the Congress workers tried to enter the collector’s office while taking out a silent rally from Rajwada, Indore, the police used force on them.

The Madhya Pradesh government has banned public rallies, religious and political events due to the pandemic. Only a limited number of people are allowed to participate in these events.

Protesting against this, Congress workers gathered at the Rajwada and staged demonstrations against the government. The protesters were carrying placards with slogans against the administration and the government. Many Congress workers were seen wearing saffron clothes. These protesters who tried to go to the collector’s office from Rajwada, were stopped by the police, who first used water cannons on them and when the workers did not stop, they used force.

Condemning the police action, former Chief Minister and State President of the Congress, Kamal Nath said, “In Indore, free hand to the BJP’s ‘Jan Ashirvad Yatra’, hundreds of stages in the middle of the roads, welcome gates, hours of jam on the main roads, all the Covid safety rules were blown away, and today, when thousands of Congressmen in Indore demanding permission to celebrate major religious festivals like Ganesh Utsav, Dol Gyaras, Anant Chaturdashi, Navratri, Eid, Dussehra, Deepawali, Guru Nanak Jayanti, Christmas, etc, they were lathi charged, water cannoned to suppress them.”