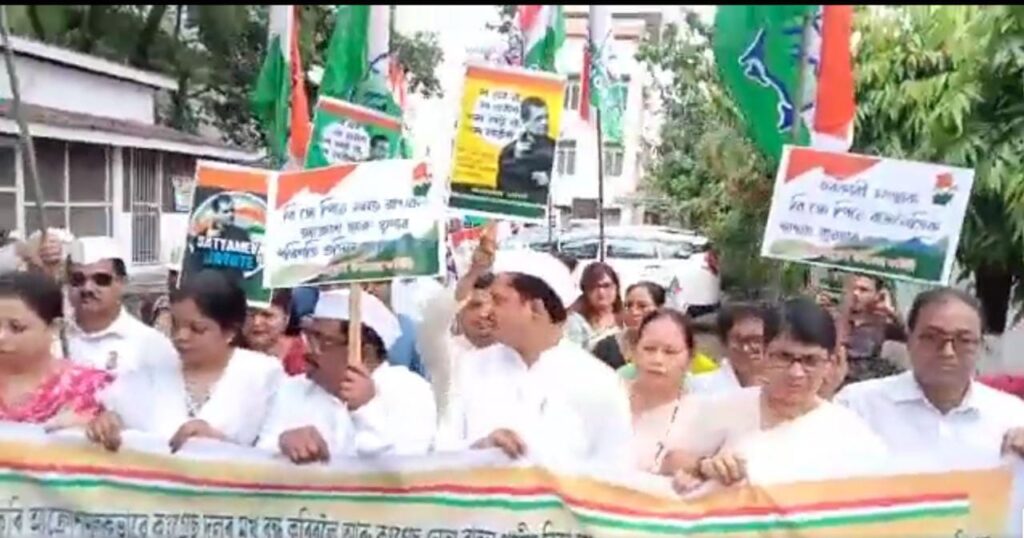 Guwahati/Agartala : The Congress workers and leaders in several northeastern states including Assam on Wednesday organised protests against the questioning of their leader Rahul Gandhi by the Enforcement Directorate (ED).

In Guwahati, the police detained Assam Congress President Bhupen Kumar Borah and other leaders and workers when they were protesting against the summons issued by the ED to Rahul Gandhi.

The protests later turned tense as clashes were reported between the police and the protesters following which a police officer got injured.

The police had put up barricades to stop the Congress members — men and women, from protesting and when the protesters tried to breach the barricades, the police detained them.

The Congress leaders claimed that female protesters were “badly handled” by the police during the protest.

The Congress men led by their leaders including Rakibul Hussain, MLA Nurul Hooda, MP Abdul Khaleque were detained by the police in front of the Rajiv Bhawan, the Assam state Congress headquarters.

The Congress protesters were supposed to go to the ED office in Chandmari but police stopped them from doing so.

The Congress activists continued their protest for the third day on Wednesday.

Borah later alleged that the questioning of Rahul Gandhi was done in order to avoid Nupur Sharma’s controversial remark.

“In the same allegation brought by ED, Rahul Gandhi got a clean chit way back in 2015,” he claimed.

The Congress leader announced that they would hold a protest in front of the Raj Bhawan on Thursday.

In Agartala, Congress leaders and workers led by Tripura Pradesh Congress President Birajit Sinha organised demonstrations in front of the ED office on the outskirts of the city.

In Kohima, the Nagaland Congress led by the party’s working president Khriedi Theunuo urged President Ram Nath Kovind to restrain the BJP-led central government from indulging in “political vendetta” against their party leaders.

The Congress leaders on Monday met Governor Jagdish Mukhi at the Raj Bhavan in Kohima, on Monday and submitted a memorandum.

“Utilising the services of Central government agencies including ED, CBI, NIA etc political vendetta has been unleashed by the NDA government against political opponents in the country, ” the memorandum said.