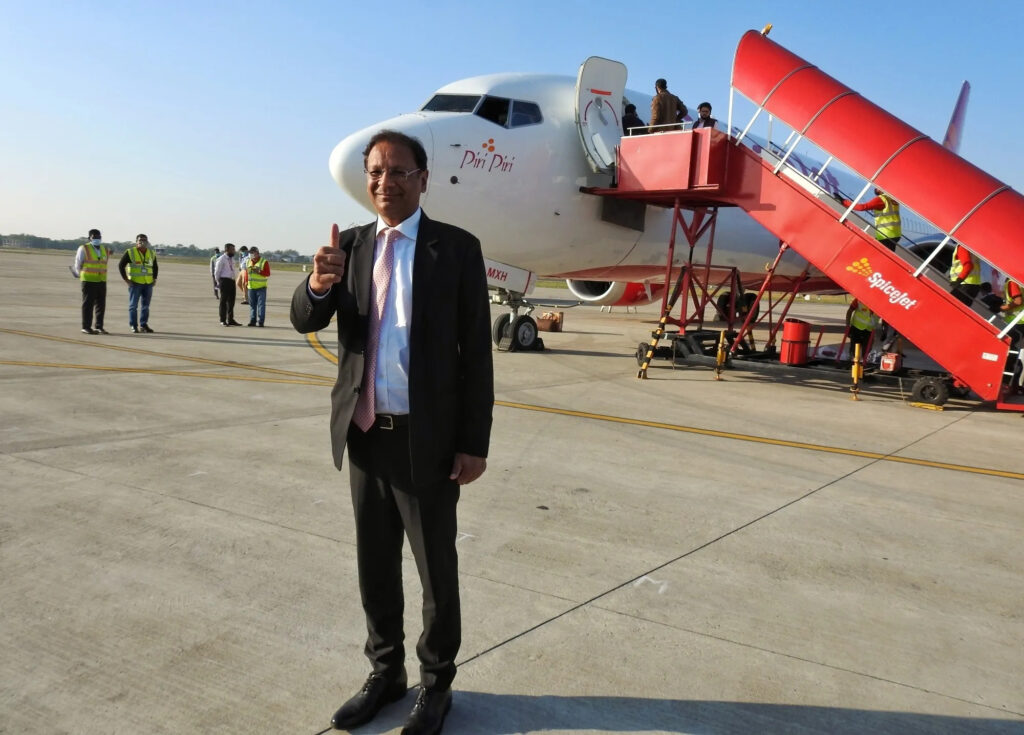 Gurugram : A case of fraud has been registered against SpiceJet Chairman and Managing Director Ajay Singh and others for allegedly cheating a Gurugram resident by delivering fake share certificates to him.

Complainant Amit Arora, a resident of the Magnolias, Golf Links, Golf Course Road, Gurugram, stated in his police complaint that Singh had delivered a fake depository instruction slip (DIS) of 10 lakh shares for services provided to him.

In connection with the incident, a case under Sections 420 (cheating and dishonestly inducing delivery of property) and 406 (criminal breach of trust) of the Indian Penal Code (IPC) was registered at the Sushant Lok police station on July 7.

The Complainant is in the business of providing non-aeronautical services including airport retail and hospitality services.

Arora told the police that in 2015, the erstwhile promoters of Spicejet i.e. Kalanithi Maran and Kal Airways Private Limited entered into a Share Sale and Purchase Agreement with the accused Ajay Singh wherein their entire shareholding was transferred to him.

“Singh told me to take over the company as it was in a dire financial situation in terms of fuel charges with various oil companies, pending statutory dues, air fleet parking charges, salaries and other vendor payments, etc. To survive, they said, company required a complete overhaul and financial restructuring,” Arora told the police.

In place of the same, Singh promised to transfer 10,00,000 shares to the complainant.

Thereafter, the complainant worked in good faith and delivered his services.

In October 2016, the complainant requested Singh to transfer shares as had promised to him.

Instead of transferring shares, Singh provided a DIS. Singh represented that to deposit such slip with his depository participant, Global Capital Markets Limited. However, when the complainant’s representative went to deposit the said slip, he was informed that it was invalid and outdated.

The complainant said, Ajay Singh, on one pretext or the other, refused appointments. He further assured that the complainant should not get worried and soon he would provide fresh depository instructions. The sudden change in stand, from stating that the slips were valid to fresh slips would be provided, was inexplicable. During the entire course of 2017, accused Ajay Singh refused to meet the complainant.

During this, Arora got to know of the other cheating case against Singh. Finding similarities between the two, the complainant then looked into the allegations against Singh and found that it was similar to his matter as well.

The complainant told the police that he conducted inquiries into the arbitration proceedings allegedly pending between Ajay Singh and the erstwhile promoters of SpiceJet.

The complainant found that the arbitration proceedings had awarded in favour of the accused.

The complainant has been further made aware that the erstwhile promoters had filed an appeal against the said arbitral award which is presently pending before the Delhi High Court and that there is no stay on such award or any restriction on the transfer of shares.

It has now come to the knowledge of the complainant that the accused used an almost identical method to defraud other persons and that about the same, different FIRs already stand registered against the accused in respect of those transactions at PS Greater Kailash, PS Hauz Khas, and at PS Rajinder Nagar in Delhi, Arora told the police.

The complainant urged the police that he has been defrauded and has been caused the wrongful loss by the action of the accused Ajay Singh. The method and manner of cheating and misappropriation, and identification of other perpetrators in this process, are all matters which require a sustained investigation by a specialized agency.

“A case of fraud related to delivering a fake DIS of 10 lakh shares for services provided to the complainant has been registered against SpiceJet Chairman and Managing Director Ajay Singh and others. We are probing all related documents related to the matter. Action will be taken as per the prescribed law,” Poonam Hooda, station house officer (SHO) of Sushant Lok Police Station .

Meanwhile, the SpiceJet dismissed the complaint as ‘frivolous, mischievous and bogus’.

“A frivolous, mischievous, and completely bogus complaint has been filed by liquor dealer Amit Arora with the Gurgaon police with an intention to hurt SpiceJet and Mr Ajay Singh’s image. At no point has the company sought any service from him, nor did he ever provide any kind of service to SpiceJet. Neither Mr Singh nor any concerned person from SpiceJet has ever met the complainant for any work, nor is there any written agreement between them. We are confident that the police investigation will prove the same and the FIR will be quashed. A defamation suit will be filed against the complainant by SpiceJet and Mr Singh,” SpiceJet spokesperson said.