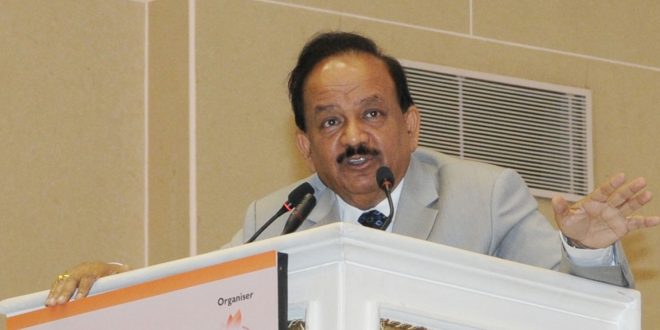 New Delhi, Union Health Minister Harsh Vardhan has clarified on the issue of vaccines after concerns were raised from various quarters including the Congress. The clarification came on late Sunday night.

Harsh Vardhan said, as per the new policy, even after the launch of third phase of vaccination starting May 1, the Government of India will continue giving vaccine doses from its 50 per cent quota to the states and UTs for free. These vaccines shall continue to be administered by states and union territories.

“It is a fact that health is a state subject, where Centre essentially coordinates and facilitates the states. After we received requests from nearly all states to liberalise the vaccine distribution policy and pass on the control to the states, we decided to go ahead,” Harsh Vardhan said.

The balance 50 per cent quota is also open for corporate and private sector to pool in their resources so that the combined effort of Team India can be deployed to vaccinate every adult in the earliest possible time, he said.

The vaccination process through GOI route will continue as before and the entire expense of this will continue to be borne by the Centre. As the eligibility criteria to get vaccinated through this route evolves further, GOI will continue to provide full support to the states to vaccinate all eligible people free of cost.

The states, therefore, as per their own priority and commitments, have to vaccinate only those remaining people who have not been administered vaccines either through the GOI free route or through the private route.

“It is thus important to note that for the common people at large, there is and will always be an option to get vaccinated for free, to ensure that the price of vaccines does not become a burden for them.” he said.

“The 50 per cent quota, that is at Government of India’s pricing, is for free distribution of vaccines and distribution of all of this will be done through the states only. Hence the allegation that Centre is getting it cheap and States are not is patently false,” he further said.

The actual situation is that states are getting one guaranteed channel of free vaccine supply, while it can simultaneously procure vaccines from another channel as per its aspirations and commitment to its people, the minister clarified.

“I see no reason why the states must complain now. They were demanding removal of restrictions on vaccine supplies to them. Under the new policy, they have the liberty to directly procure from the manufacturers and even negotiate prices based on volumes. This will also cut the delays. I empathise with the states because they are leading this battle from the front and need fast replenishment of vaccine stocks. They need to decide when, how, how much and to whom. This is exactly what the Centre has done by easing the process,” the Union Health minister said.