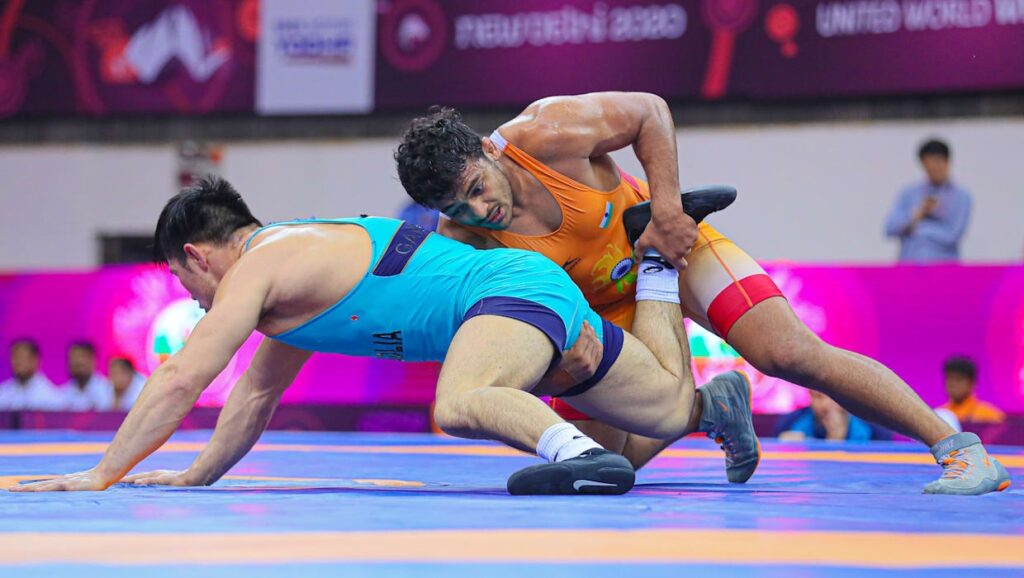 On the opening day of the wrestling competition, Ravi Dahiya defeated Bulgaria’s Georgi Vangelov 14-4 on technical superiority to reach the last-four in the men’s 57kg category, while compatriot Deepak Punia overcame China’s Zushen Lin 6-3 on points to advance to the semifinals.

Dahiya will take on Nurislam Sanayev of Kazakhstan in the last-four, while Punia will be up against David Morris Taylor of the USA. Sanayev upset former world champion Yuki Takahashi of Japan in a thrilling quarterfinal bout.

Dahiya opened the scoring with an explosive takedown against Vangelov, with the Indian continuously targeting the Bulgarian’s right leg and building a 6-0 lead heading into the second period. In the second period, Dahiya scored from a two-legged takedown to go 8-0 up.

In a series of quick exchanges after that, Dahiya came out on top to build up a 14-4 lead to win the bout by technical superiority.

In wrestling, a 10-point lead over the opponent results in a victory by technical superiority.

Earlier, in his opening Round-of-16 bout on Wednesday, Dahiya had defeated Colombia’s Oscar Tigreros by technical superiority to secure a quarterfinal spot. The 23-year-old Dahiya showed no nerves as he dominated the bout to win 13-2.

Dahiya landed one attack after another, winning by technical superiority with minutes to spare.

India’s 86kg freestyle wrestler Deepak Punia showed no signs of the niggle that had forced him to pull out of the Poland Open Ranking Series in Warsaw in June, as he defeated China’s Lin Zushen 6-3 in the quarterfinals to set up a last-four clash with former world champion David Morris of the USA.

Punia, silver medallist at the 2019 world championships, was staring at an early exit but the 22-year-old managed a two-point takedown in the final 10 seconds of his bout against the Chinese to keep his Tokyo medal hopes alive.

Though the Chinese coach challenged the validity of the move, the decision to award Punia the bout was upheld.

Earlier, in the Round-of-16 bout Punia had beaten Nigeria’s Ekerekeme Agiomor 12-1 on technical superiority to secure a quarterfinal berth.

India’s woman grappler Anshu Malik lost the 57kg opening bout to two-time world championship bronze medallist Iryna Kurachkina of Belarus 8-2 on her Olympic debut in women’s 57kg, but she can still hope for a re-entry through the repechage route if Iryna enters the final.

Up against the reigning European champion and a two-time world championships bronze medallist, Anshu started on a cautious note and ended up getting a passive warning, following which her opponent was awarded a point.

Anshu conceded another point for ‘out of play’ as the Belarusian pushed the Indian in the protection zone. Iryna then executed a two-point takedown to end the first period 4-0 up.

Anshu Malik had sealed her place at Tokyo 2020 through the Asian Olympic qualifiers in April. Anshu managed to win the quota ahead of world championship bronze medallist and compatriot Pooja Dhandha.