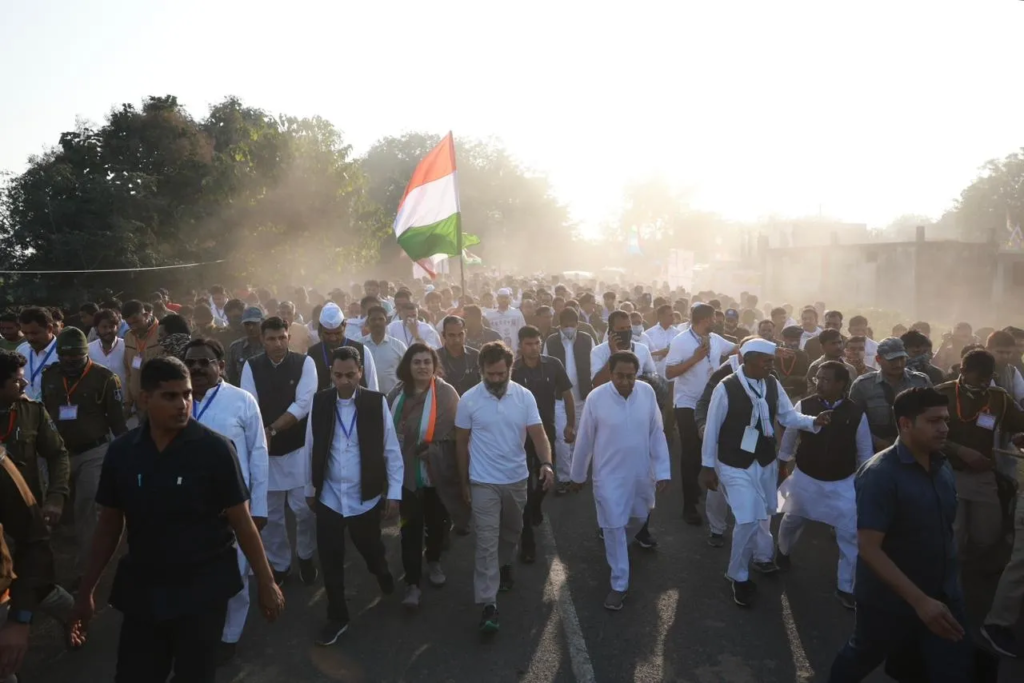 The foot-march began around 6.30 a.m. after Maharashtra Congress president Nana Patole handed over yatra flag to Madhya Pradesh Congress chief Kamal Nath at a village in Burhanpur district around 5.30 a.m.

Of the total 120 people, who are marching along with Rahul Gandhi from Kanyakumari (Tamil Nadu) and will be part of the entire 3,070 km yatra (from Kanyakumari to Srinagar), 11, including four women, hail from Madhya Pradesh. The list excludes two-time former chief minister Digvijaya Singh, who is the convener of the Yatra.

During a press conference at Burhanpur, Congress general secretary and in-charge of communication, publcity and media department Jairam Ramesh said that the yatra will cover around 21-22 km every day in two parts.

He added that the schedule for yatra will remain the same for next 11 days in the state, except days fixed for rest for yatris.

Giving further details about some other programmes in the state, Jairam Ramesh said on November 26, Rahul Gandhi is scheduled to visit Mahow — the birth place of Dr. Bhimrao Ambedkar.

Rahul Gandhi is expected to attend a public rally on November 28 in Indore and address a mahasbha in Ujjain on November 29.

“A press conference will also be organised on November 28 in Indore, the seventh time when Rahul Gandhi will answer the media persons’ queries since the Yatra started on September 7,” Jairam Ramesh added.

Jairam Ramesh also informed that November 30 has been fixed as the rest day.

“Here, I would like to make it clear that Rahul Gandhi will rest in Madhya Pradesh, during which he will also meet with people, but will not go to Delhi. Bharat Jodo Yatra will enter Rajasthan on December 4,” Jairam Ramesh added.

Digvijaya Singh, meanwhile, took dig at the BJP-led Madhya Pradesh government, saying, “Today, when yatra began in Burhanpur, the entire area was filled with dust from damaged road. The BJP always target me on roads issue, but this is the real condition of roads in Madhya Pradesh.