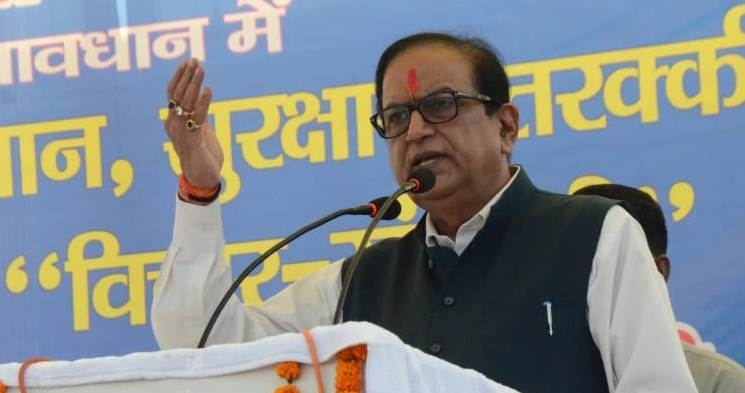 Lucknow : All political parties are gearing up for the upcoming Assembly elections in Uttar Pradesh. The Bahujan Samaj Party (BSP), which has been in power in the state four times, has already kicked off its election campaign by holding “Prabuddh Samaaj Goshthis” or the enlightened class conferences to woo three upper caste communities — Brahmins, Tyagis and Bhumihars.

BSP General Secretary Satish Chandra Mishra, who is heading the enlightened class conference, is confident that in 2022 his party will form the government in Uttar Pradesh.

Mishra in alleged that the BJP and the SP are each other’s B and C teams. He said both these parties deliberate together on the issues which need to be raised.

The BSP leader said, “When we had lent outside support to the Congress, we were accused of being the B-team of Congress. Parties making such claims have no concrete issues to raise before the people. I ask that SP is the B team of which party? Who had helped the SP to form the government in Uttar Pradesh during 2003? They did not have a majority at that time. They took 37 MLAs from the BSP and still did not have the majority. At that time both the Congress and the BJP helped to form the SP government in Uttar Pradesh which lasted for nearly 3.5 years. So who is the B team of the SP? At that time the Speaker of the UP Assembly had justified this decision. We challenged this decision in the Supreme court to which the latter termed the decision as unconstitutional. So in reality everyone knows who is the B team.”

The BJP is known as a party of Brahmins-Banias, how are you confident that Brahmins will vote for the BSP. Mishra replied that Congress too considered Brahmins as their traditional vote bank but they eventually drifted away from them. Brahmins are the most ‘Budhijeevi’ (intelligent) community and need respect which they rightfully deserve. When the BSP created a peaceful co-existing society of Dalits and Brahmins, then only they have got their desired rights.

The BSP gave proper representation to the Brahmin community by having 45 MLAs, 15 cabinet ministers, 12 MLCs, one Advocate General and 5,000 government lawyers from the community. We have worked for the welfare of all sections of the society and given due respect to every community, Mishra added.

Asked if the BSP cadre is upset as the party is wooing the Brahmins, the BSP General Secretary said we not only speak about the welfare of Brahmins but all sections of society. Party cadre meetings are being held at the booth level in Uttar Pradesh. Brahmins, Dalits and minorities, including people from each and every section of society, attend these meetings. These people are constantly engaged in strengthening the party cadre base.

Asked whether the BSP which has been considered an expert in social engineering during elections, has not taken the support of the Muslim community aggressively, he said the Muslim community is standing firmly with the BSP. Party meetings are being held keeping in view the welfare of the Backward Castes and the Muslim community in every district. Together people from these communities will help the BSP form the government in Uttar Pradesh.

Mishra said the BSP has never had an alliance with AIMIM’s Asaduddin Owaisi. The BSP had formed an alliance with former RLSP Chief Upendra Kushwaha during the 2020 Bihar Assembly polls. THe BSP did not have any alliance with Owaisi in the past and will not do so in the future.

Mishra said there is only one face in the BSP which is that of party Chief Mayawati. Other leaders can keep entering and exiting the party. The entire UP election will be fought in the name of Mayawati. The rest of the party leaders are appointed only by Mayawati. Those who quit the party are never discussed again. This has been the political history of the BSP, he added.

Asked whether he will be the Chief Ministerial face during the 2022 UP polls, Mishra said such reports floated in the media are fake. The leader of the BSP is only Mayawati.