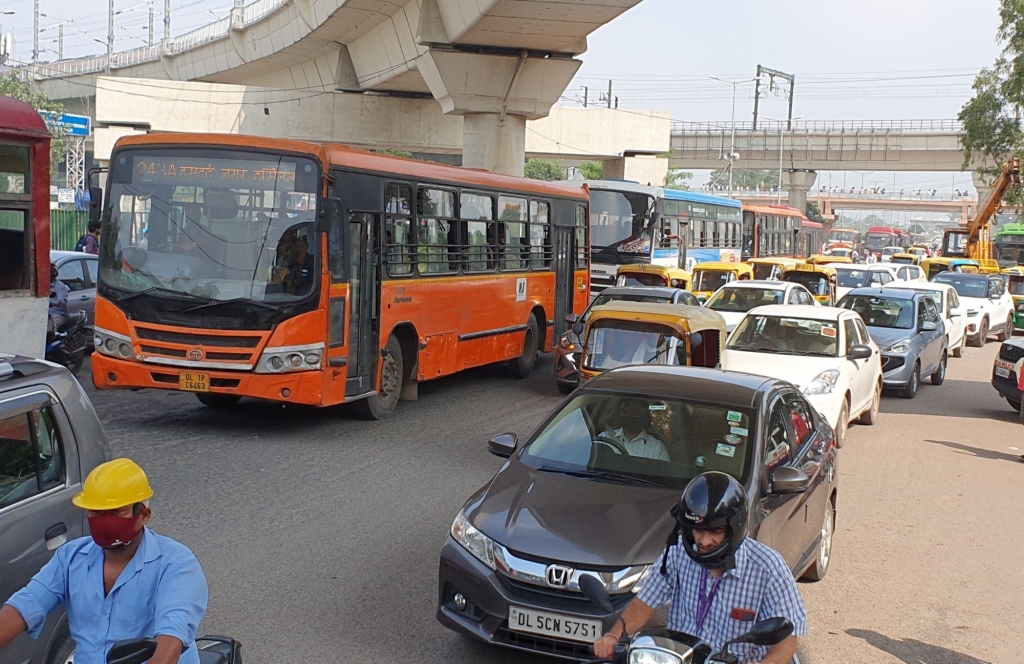 New Delhi : Over two dozen trains were halted at various locations in Punjab and Haryana and road traffic towards Delhi was affected massively due to the Bharat Bandh call by farmers’ unions on Monday even as Delhi remained relatively undisturbed with almost normal road and metro traffic.

Work wise, offices, both private and government, remained functional, and even schools, including Kendriya Vidyalayas, and colleges were working according to the recent routine post-lockdown. Even all markets, big and small, remained functional across Delhi-NCR. Commuter movement remained unaffected as people freely used their own vehicles or auto-rickshaws, cycle-rickshaws and DTC buses.

The Samyukt Kisan Morcha (SKM), a consortium of 100-odd farmers’ unions from across India, 15 trade unions and several political parties have jointly called a Bharat Bandh from 6 a.m. till 4 p.m. on Monday to mark the first anniversary of what they termed as a ‘Black Day’ when the President of India had given his assent to the three farm laws last year.

Within the city, Delhi Traffic Police had closed both carriageways across the iconic Red Fort since morning. The move came in wake of the turnout of events on January 26 when thousands of farmer protesters had barged across the security cordon, caused a lot of damage and planted two flags at the place where Indian Tricolour is hoisted on the Independence Day.

The Delhi Metro Rail Corporation (DMRC) has shut down the Pandit Shree Ram metro station that is close to the Tikri border in western Delhi. However, at other places, the metro is functional without any delay.

Secretary general of the Confederation of All India Traders (CAIT) Praveen Khandelwal said, “All markets remained open not just in Delhi-NCR but across India. We are constantly in touch with our representatives everywhere. Things are normal.”

The traffic turnout at Ghazipur border was normal till 8 a.m. while that from Uttar Pradesh towards the border was stopped except for police vehicles and ambulances. Farmers could be seen in large numbers sitting on the road and raising slogans against the farm laws.

This is the place where farmers’ leader Prakash Tikait and others have camped for the last ten months.

At the Tikri border, farmers have almost captured the Bahadurgarh Railway station and are squatting on the railway line. However, road traffic and life outside the railway station was normal, shops were open, people were moving around freely using two-wheelers and four-wheelers too.

While the security enforcement was strict at the metro station near the Tikri border, there was no disruption in metro rail services from that station.

The Loni border connecting the Baghpat Highway remained open to traffic with all entry and exit points at the Loni border witnessing no traffic disruption. However, security forces have been deployed at the border area in wake of the Bharat Bandh.

“There is no impact of Bharat Bandh in this area. The smooth traffic movement of daily commuters runs normal at the Delhi Loni Border. Market here will remain open as they can’t come here in this area.”

A shopkeeper also said that if farmers anyhow try to enter into Delhi via this route, the security forces will obstruct them at Khajuri DLF toll.

At the Singhu border, there were a large number of tractor trolleys parked but there were relatively very few people. This is one of the places where farmers have been sitting on protest since November 2020.

Around two and half km long stretch of Delhi-Karnal highway (at Singhu village), where a large number of farmers have always been seen during the last few months, on Monday bore an almost deserted look. Even the two stages erected for regular speeches and rallies were almost empty.

Jagdish Singh, a farmer from Ludhiana (Punjab) said, “Trolleys are vacant because people living in them have gone to block roads at Tikri and Delhi-Haryana border.”

“By evening the situation will be different and more and more people will be here,” Singh, who was busy preparing food for the protesters, .

People, who were at the Singhu protest site, were seen busy either preparing food or cleaning outside their tents.

Security at the outer premises of Singhu protest site has been strengthened with multiple teams of Delhi Police and Central forces deployed. People going towards Singhu from Delhi have to take a long circuitous way as entry on the Delhi-Karnal Road (at Singhu village) has been prohibited.

The commuters on the Delhi-Jaipur Expressway had to face a huge traffic congestion as the Delhi Police had put barriers at the Delhi-Gurugram border to keep a vigil on the farmers entering the national capital.

A heavy presence of security personnel was seen at the border. Apart from the central forces, the Delhi Police and the Gurugram Police personnel had barricaded the border. Due to this only two lanes from Jaipur towards Delhi were opened for commuters entering Delhi. The traffic movement on the National Highway-48 was slow and the vehicles were moving bumper to bumper.

Disruption in rail traffic towards Delhi

More than 20 locations are being blocked in Delhi-Ambala-Firozpur division and about 25 trains were affected due to the farmers sitting at the railway stations and railway lines.

“About 25 trains of the Northern Railways have been affected due to the farmers’ Bharat Bandh. These are all on the Delhi-Ambala-Bhatinda main railway line,” said Northern Railway’s chief public relations officer Deepak Kumar.

Media Coordinator of Swaraj Abhiyan, which is also a part of this farmers’ consortium, Ashutosh agreed that all action was happening outside Delhi. Farmers from Delhi rural are protesting in their own areas but their protests won’t spill over to urban areas.

“We don’t plan to enter Delhi as of now. Farmers are not being allowed to enter Delhi and we are not even demanding anything new. So, there is no point in entering Delhi right now. Whenever we do, we will inform the government and enter,” Ashutosh,.

The Samyukta Kisan Morcha had assured that the Bharat Bandh will be enforced in a voluntary and peaceful manner.

“So far, all the protests at Delhi borders have been peaceful and no untoward incident has been reported from anywhere,” Delhi police sources said.