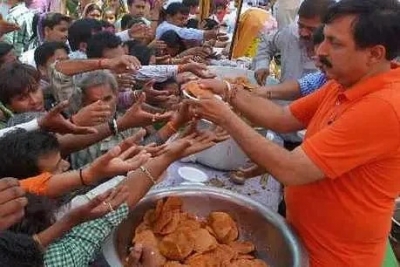 Lucknow, Bada Mangal is a festival held on all Tuesdays falling in the Hindu month of Jyeshtha in which devotees worship Lord Hanuman and people from all walks of life and faiths organise roadside ‘bhandaras’ (feasts) for the public.

The tradition of organising Bada Mangal fairs at the temples is nearly 350 years old and is said to have started after Janab-e-Alia, the Hindu wife of Nawab Shuja-ud-Daulah, built the temple after her wish for a child was fulfilled.

Over five lakh devotees from various parts of the state visit the temple to celebrate Bada Mangal.

A major attraction of the event is the bhandaras that are organised on roads leading to the temples.

From the traditional poori-sabzi to chole bhature and now chowmein and even burgers, along with sherbets and cold drinks are served to devotees and once can see people arriving in luxury cars to savour the ‘prasad’.

“It has been two years when the bhandaras could not be held due to the pandemic but this year, they will be held. We appeal to the people to maintain cleanliness and hygiene during the events,” said Lucknow Mayor Sanyukta Bhatia.

The Mayor said that Lucknow Municipal Corporation (LMC) will provide free of cost garbage collection and disposal facility at the registered bhandara sites.