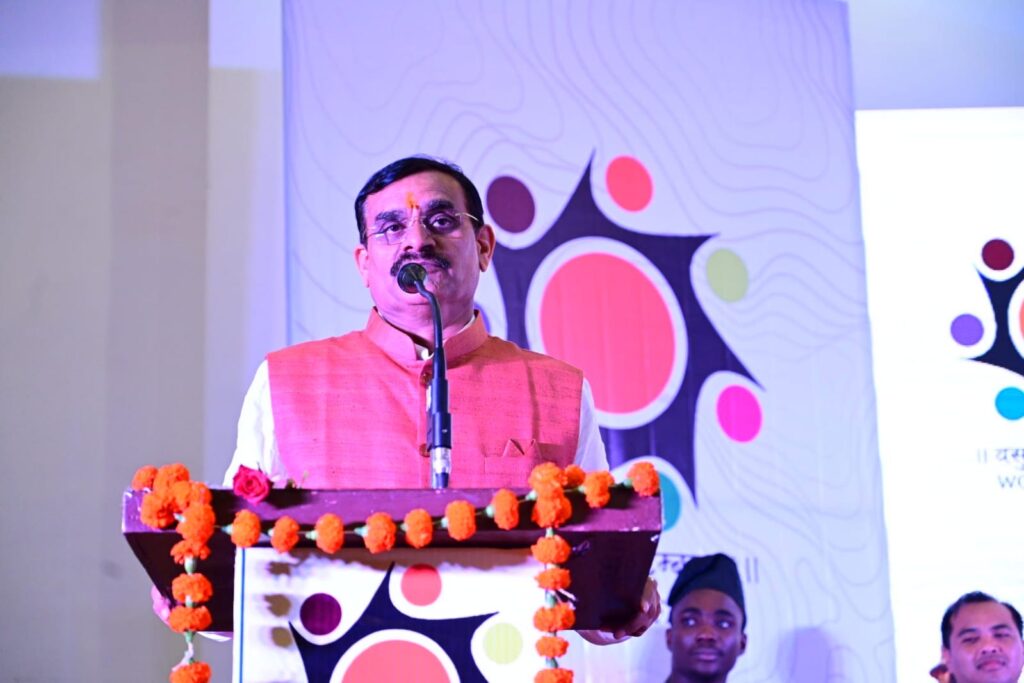 Bhopal : The two-year tenure of Madhya Pradesh BJP President V.D. Sharma will end by February 2023, just around eight months before the next Assembly elections, which are scheduled in November next year – and it remains to be seen if he will remain at the party’s helm till then.

With Madhya Pradesh bracing for a heated Assembly elections, both the BJP and the Congress are preparing fervently.

The state BJP recently shifted its party headquarters to a new temporary venue, where it will plan strategies for 2023 elections, as its existing old office is to be demolished and a multi-storey building will come up in its place, and this will take at least two years. Thus, the speculations rife here in Madhya Pradesh that the headquarters has changed, whether the state President will also be changed ahead of Assembly elections or Sharma’s tenure will be extended for the two years?

While the decision would be taken by the BJP’s central leadership, indications are that Sharma is most likely to remain as state President at least till the Assembly elections are over.

Political observers and BJP sources claim there are marginal chances that the party would replace Sharma, especially when the elections are just few months away. Speculation about the change had gained momentum after Sharma was included in the BJP’s advisory committee on foreign issues. He had also played a crucial role during the inauguration of newly-developed ‘Mahakal Lok’ in Ujjain, and hundreds of NRIs had witnessed the inauguration live when it was unveiled by Prime Minister Narendra Modi on October 11.

“No one can make a claim whether V.D. Sharma would continue leading the party or a new face will be seen after his tenure gets over, as uncertainty always remains in politics… but observing the situation, there are several reasons which indicate that Sharma will get extended tenure,” said a political observer.

Sources note that in the last two years, Sharma has won confidence of the central leadership, especially BJP President J.P. Nadda and in the state, he has support from Chief Minister Shivraj Singh Chouhan.

“Shivraj Singh Chouhan wasn’t replaced by the central leadership probably because of elections getting closer and therefore, the party won’t take a risk by introducing a new face when the elections are just few months away,” said a senior BJP leader requesting anonymity.

Another factor why Sharma likely to remain as state President, say political observers, is that in the last two years, he has also established as a prominent Brahmin face of the party. A Chouhan remark during the 2018 Assembly elections had was one of the key factor why upper caste voters, specifically Brahmins, had shifted toward the Congress.

Secondly, as political observers note that in the last elections, Sharma was appointed as in-charge for the Vindhya Pradesh region and the party had won 24 out of 36 seats there. Rewa used be a stronghold of the Congress but the BJP had won all eight seats in 2018.

“V.D. Sharma was made state President because of outcome of his work done in the last Assembly elections. He is down to earth and easily accessible to party’s ground level workers. He has almost reshaped the party especially in ground level,” a youth BJP worker from Rewa said.

Sharma, who is first time MP from Khajuraho, was appointed state President after the party had lost the 2018 Assembly elections, replacing Rakesh Singh. He took charge on February 15, 2020 and just a month later, the BJP was back to into power, as the Kamal Nath-led Congress government collapsed after Jyotiraditya Scindia, along with 20 party MLAs, switched to the BJP in March 2020.