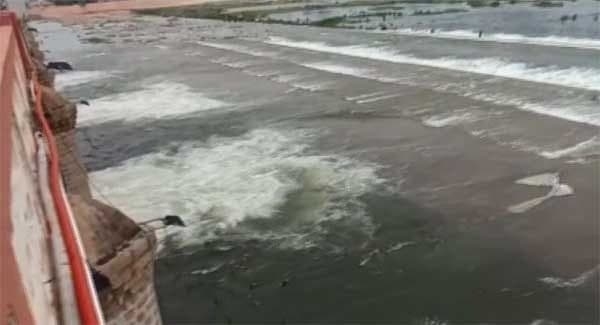 Hyderabad: Amid raging row over sharing of Krishna river water, the Telangana government has demanded that Krishna River Water Management Board (KRMB) cancels its three-member committee meeting scheduled on July 9. Instead, it should convene a full-fledged board meeting after July 20 or later, including the points raised by Telangana in its agenda.

Telangana made it clear that it would not recognize Pothireddypadu project, which is being illegally constructed by the Andhra Pradesh government on Krishna river without any environmental clearances or allocation of even a drop of water to the project or any permission from the Green Tribunal.

The meeting vowed not to allow Potireddypadu project and instructed the officials concerned to put forth their arguments opposing the illegal Rayalaseema Lift Irrigation Scheme. It has decided to send Telangana issues to be included in the KRMB agenda immediately.

The meeting summarily rejected the 66:34 ratio so far continuing on Krishna waters between Andhra Pradesh and Telangana. It said the ratio should be 50:50 water allocation from this year onwards. Till the Tribunal makes the final allocation, the meeting proposed that Telangana and Andhra Pradesh should share 811 TMC (thousand million cubic feet) of water, 405.5 TMC each from the assured waters.

Ignoring the objections by Andhra Pradesh, the meeting also decided that power generation would continue at Jurala, Pulichintala, Srisailam, and Nagarjuna Sagar. It declared that KRMB has no right to stop the power generation. It said there are no agreements between the two states on hydel power generation.

The meeting rejected the misinformation campaign launched by Andhra Pradesh that the Telangana government is releasing water to the sea after generating power at Pulichintala. The meeting suggested to the Andhra government to utilise the water released from Pulichintala after the power generation through Prakasam barrage to fulfill the needs of Krishna district. This would, the meeting said, reduce the cost of power bills for lifting Godavari water from Pattiseema.

The meeting reiterated that Telangana government is utilising every opportunity lawfully to fulfill its needs to lift water for irrigation, to supply drinking water to Hyderabad and for the drinking water purposes through Mission Bhagiratha Scheme.

The meeting felt that it is ridiculous on the part of Andhra Pradesh to lodge complaints with the KRMB to stop power generation, when Telangana is utilising the water allocated lawfully in Srisailam to generate power from the project essentially meant for the power generation.

K. Chandrasekhar Rao said since Telangana has a terrain which allows water for irrigation through lifts, there is a need to generate more hydel power. He instructed the irrigation officials to lift water in accordance with the states right over the allocated water from Kaleshwaram on Godavari river. He instructed the officials concerned to generate continuous power from Srisailam, Pulichintala, and Jurala power generation plants. The Chief Minister made it clear that to safeguard the interests of farmers and the farm sector, the government would face any obstacles and problems.

“Telangana region is above the sea level geographically. Though rivers are flowing around the state, there is no possibility of drawing water for irrigation by gravity. In this backdrop, the state is in a dire situation where water has to be lifted to supply for irrigation. Under the Andhra colonial rulers, for decades the agriculture sector was neglected in the Telangana region and lift irrigation projects or schemes were never given any priority. Thereby the united Andhra Pradesh rulers have reduced cultivation as a wasteful profession and did a lot of injustice to the farmers here,” the Chief Minister said.

With this the Telangana state had witnessed bumper yields and it became ‘Annapurna’ (rice bowl) to the entire country. This became possible as river waters are drawn through the lifts. In this background, we are planning more projects along Krishna and Godavari rivers.

“To give water for two crops, we will utilise the water allocated to us as right to generate hydel power. The river water allocated by several tribunals to the state will be utilised constitutionally, for providing water for irrigation and to generate hydel power to lift the water. For Telangana’s agriculture and welfare of farmers, we will fight with anyone to any extent,” the CHief Minister added.

KCR reiterated that they would cooperate with the neighbouring states to utilise water rightfully allocated to them but people in Telangana will not keep quiet if the states try to utilise the water illegally and forcibly without any allocation. He said Telangana faced severe problems due to lack of irrigation water for decades but under self-governance such a situation would not be allowed to recur.

He said several tribunals were constituted to allocate water to the Telangana state lawfully, they have given several awards but it is unfortunate that none of those awards were implemented.

He expressed anger over non-allocation of water in Krishna river to the state despite the constitution of the Brijesh Kumar Tribunal 17 years ago. He also made it clear that if need be, the state is ready to fight with the Centre.