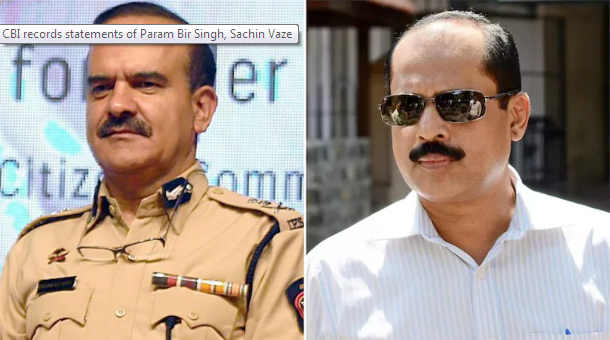 New Delhi:  Even as a Special NIA court has granted permission to the Enforcement Directorate (ED) to question sacked police official Sachin Vaze at the Taloja Jail in connection with the alleged corruption case lodged against former state home minister Anil Deshmukh, the financial probe agency will soon also question former Mumbai Police Commissioner Param Bir Singh, sources said. According to informed sources in the ED, Singh will be called for questioning in the coming days.

Earlier in the day, ED officials said that the agency will question Vaze on Saturday inside the jail premises in Mumbai. On Thursday, a Special Court has granted permission to the ED to visit Vaze and record his statement in the jail.

It may be recalled that on May 19, Vaze had claimed to the ED that he had collected Rs 4.70 crore from bars in Mumbai between December 2020-February 2021 allegedly on Deshmukh’s orders.

Vaze said that he later handed over the amount to the ex-minister’s PA Kundan Shinde, who is now arrested in the same case, along with another PA Sanjeev Palande.

On its part, the ED said that Shinde has denied knowing Vaze and was not cooperating with the investigations, though both he and Palande were directly linked in the crime.

Deshmukh, who was forced to quit because of the allegations against him, has skipped three ED summons recently for questioning and has moved the Supreme Court seeking protection against any coercive action.

Vaze was arrested in connection with the sensational case of planting a SUV with 20 gelatin sticks and a threat note near the home of industrialist Mukesh Ambani and the subsequent death of the vehicle owner Mansukh Hiran.

Later, Vaze penned a note alleging Deshmukh had demanded Rs 2-crore to reinstate him in service and also set a target to collect Rs 100-crore per month from hoteliers and bars in Mumbai.

He also targeted Shiv Sena’s Transport Minister Anil Parab alleging that the latter had asked to collect money from contractors for him.

Both Deshmukh and Parab have stoutly denied the allegations and termed it as a strategy of the Opposition Bharatiya Janata Party to defame and malign the image of the Maha Vikas Aghadi government.