Mumbai,  The Indian stock market surged on Friday with both the BSE Sensex and the Nifty50 on the National Stock Exchange (NSE) settling at record high closing levels.

Earlier in the day, Sensex crossed the landmark 55,000 mark for the first time in its history and touched its all-time intra-day high of 55,487.79 points.

On Thursday, the Index of Industrial Production (IIP) for June showed a rise of 13.6 per cent from a decline of 16.6 per cent reported for the like month a year ago

Further, data furnished by the National Statistical Office (NSO) showed that the Consumer Price Index (CPI) slipped to 5.59 per cent last month from 6.26 per cent in June.

The top gainers on the Sensex were Tata Consultancy Services (TCS), Larsen & Toubro and Bharti Airtel, while the major losers were Power Grid, IndusInd Bank, and Bajaj Finance. 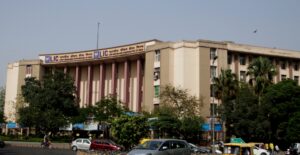