And Lacey Turner and her husband Matt Kay enjoyed a family day out with their little one in London on Bank Holiday Monday.

The actress, cut a casual figure in a blush pink tracksuit, while Matt looked every inch the doting dad as he carried his daughter to Pizza Express.  Lacey, who is best known for her role as Stacey Slater on EastEnders, paired the co-ord with patterned trainers and a black beanie.  She wore her long ombre locks down in a sleek straight look and showcased her flawless complexion by going make-up free.  Matt also sported a relaxed outfit as he stepped out in a Puma hoodie and a baseball cap, while Dusty Violet looked adorable in a mini-me yellow tracksuit.

After parking their car, the family headed to Pizza Express to make the most of the Eat Out Dine Out offer.

The soap star recently celebrated the birthday of her childhood sweetheart, Matt Kay, who she married in 2017 at an intimate Ibiza ceremony.

Taking to Instagram, the actress shared a series of sweet snaps while adding the caption: ‘Happy birthday my love!

‘Thank you for being our best friend, the best husband and best daddy in the whole wide. We love you forever & ever’.

Appearing on Loose Women, the EastEnders star reflected on her journey to motherhood after welcoming daughter Dusty in July with Matt.

Lacey revealed: ‘It took us ages to get pregnant. I put so much pressure on myself to fall pregnant and it wasn’t happening.

The actress tragically suffered from two miscarriages and had begun to give up hope.

She refused to acknowledge her third pregnancy until she was 14 weeks along, and even then she would not allow herself to get excited until she reached the 25 week mark.

She added: ‘It got to the point where I said to Matt, “Let’s just forget it. We’ll get a puppy.” As soon as we’d said that, we fell pregnant.’

Revealing she had a scan ‘every week’ during her pregnancy with Dusty, she explained: ‘I was so scared. Until you feel kicking, you don’t know if anything is actually there. 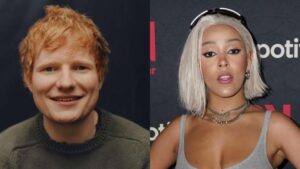