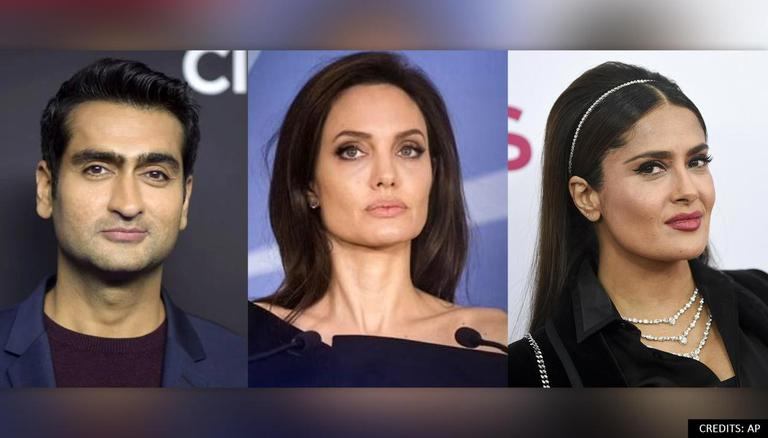 Los Angeles : Pakistan-origin actor-comedian Kumail Nanjiani learned “how to be a pro” from his ‘The Eternals’ co-stars Angelina Jolie and Salma Hayek.

The 43-year-old actor stars alongside the two women in upcoming Marvel blockbuster ‘The Eternals’ and he was “so impressed” with how the actresses helped to bond the cast together in order to “create a family”, reports femalefirst.co.uk.

Nanjiani told ‘Entertainment Tonight’: “Angie, she would not go back to her trailer. She always hung out on set. She was always with everyone. So I realised what you do on camera is only part of the job. Salma was the one who would always have dinners and people over.

He added: “They are amazing. I have learned so much from watching both of them. Just how to be a pro, you know? I was so impressed. They are always on time, they know all the words, they are very thoughtful about how they work and they really wanted to create a family.

“So much of it is how you are with people. You create a community, you create a family, you create a group. And both of them, they go on camera, they are movie stars. They are fantastic in the movie.”

The ‘Silicon Valley’ actor, who is married to Emily V. Gordon, feels “very lucky” to have been cast as Kingo in the movie as being a superhero has been “a dream of (his) for a few years”.

He added: “I really want to be a superhero in a Marvel movie, and then I was like, ‘How do I do it?’ And then I just got very lucky.”

The actor famously bulked up for the role and said that his new physique has made him finally enjoy exercise.

He said: “I feel great! I am becoming one of those people who really likes working out now. I was always, like, so annoyed by them. Now, I have become one of them.”