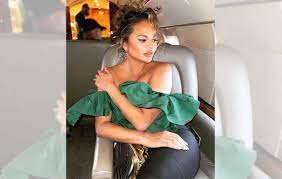 Los Angeles : Model Chrissy Teigen, who is married to musician John Legend, revealed on social media that she had fat removed from her face and the procedure has helped to give her a more defined jawline.

She said in an Instagram Story video: “I did that Dr Diamond buccal fat removal thing here. And since I quit drinking, I’m really seeing the results. And I like it, yeah.”

The model also said that she feels no embarrassment about having undergone the procedure.

Teigen, who also underwent surgery last year to have her breast implants removed, wrote over the video clip: “No shame in my game.”

She shared that she’d gone 50 days without drinking any alcohol, saying that it had been her “longest streak yet” after previously having “a few hiccups” in her sobriety journey over the past year.