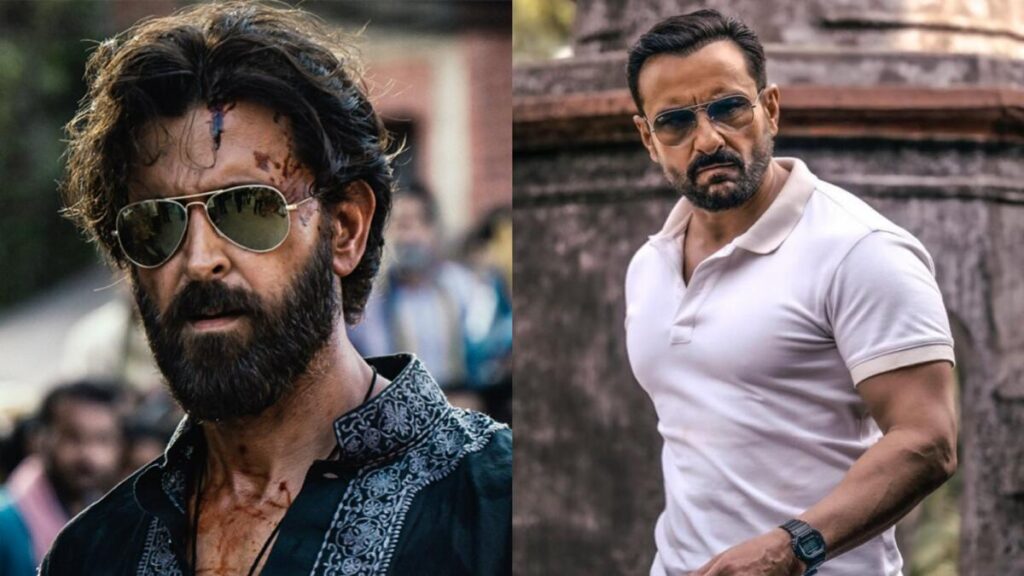 Vikram, an honest Lucknow police officer, is on a mission to find and kill gangster Vedha. However, when Vedha surrenders to the police and begins telling stories to Vikram, he changes his perspective on good and evil.

The film begins with an introduction to Saif’s character Vikram, an honest officer and encounter specialist. Who is staging fake encounters and killing gangsters to rid society of evil? Vikram now has only one goal in mind: to apprehend Vedha the gangster. When Vikram is about to carry out the mission to kill Vedha, he surrenders and here comes the inspiration from ‘Baital Pachisi,’ which tells how a wise king (Vikram) is quizzed by a celestial spirit (Vedha), a Bhairava, and for each incorrect answer, he is further away from capturing the ‘master of chaos.’

Vikram, like Betaal, becomes entangled in Vedha’s web of challenging problems when they meet. Vedha would eventually get rid of Vikram, but he keeps sowing doubt in the ‘saint’ cop’s mind. The rest of the film revolves around how things take a 180° turn at the end of his third story.

When it comes to star performances, seeing Hrithik and Saif in the same frame is a real 7-course meal for the eyes. They have, without a doubt, given their all and proven their worth yet again.

Hrithik Roshan knew he was going to replace Vijay Sethupathi before stepping in, and it took bravery for him to accept the challenge. To be honest, Hrithik’s performance as Vedha was incredible. He just nailed the role, and how?
What distinguishes this from the original is the way he balances the extremes of good and bad in himself. It’s like playing the best and worst person on the planet at the same time and nailing both. It’s not like anyone can cut a good mask for it, but Hrithik’s inconsistent accent was disappointing, but it only had a 0.0000000001% impact on his overall performance.

Saif Ali Khan replaces R Madhavan, and it’s easy to see why he was chosen. He’ll always be proud of Sacred Games on his resume, but now he can surely add Vikram to his resume. Radhika Apte didn’t get much of a chance to show off her acting skills, and it wasn’t something she could only do.

As HR’s younger brother, Rohit Saraf will give you K3G’s Rohan vibes as he manages to look as cute as ever while building just the right amount of emotional connection with the viewers. Yogita Bihani appears to be a misfit in this film, as she does not fit in with the ‘raw & rustic’ theme.

Every scene comes to life thanks to the background score. It’s so revitalising and energising that it’s both overwhelming and amazing.

Every song beat and background music touches your heart in some way.

Vinod makes the most of Hrithik Roshan and Saif Ali Khan’s charisma by incorporating them into slo-mo sequences. The way he pans the camera in certain sequences was unmissable. Special mention should be made of the long shots in which the cinematographer captures Hrithik and Saif fighting in the same frame.

A mass entertainer with an amazing story and performers like Hrithik and Saif is a pure delight. This film is a must-watch.