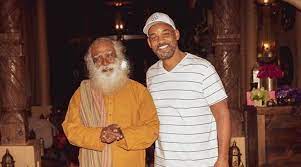 Mumbai, Smith was spotted arriving in Mumbai, India, over the weekend. Smith smiled and waved to his fans 12-and-a-half time zones ahead of his home in Los Angeles.The trip marks the first time the actor has been publicly spotted since slapping comedian Chris Rock in the face on stage during the 2022 Oscars ceremony. It remains unclear why Smith was in India, or if it was for any business reason.  Some say, Smith traveled to India for spiritual purposes, specifically to practice yoga and meditation from Sadhguru, who has been an inspiration for the actor for quite sometime now.

Smith was staying at the JW Marriott Hotel Juhu, a 5-star rated luxury resort by the beach that features both an infinity pool and a salt water pool. This is not his first time to India, Smith has been to India before, and recently recorded a video with spiritual leader Sadhguru.

Back in the U.S., The Slap’s aftermath continues to ripple across Hollywood. Smith apologized to Rock after slapping him over a joke about Jada Smith’s baldness. The actor has since then been banned from attending any Academy Award events for the next 10 years. Some of Smith’s future projects appear to be on pause for now; Netflix reportedly canceled its sequel to Bright, though CNET noted the reasoning for the decision was unclear. There is also no shortage of rumors concerning the status of Will and Jada’s marriage.

Amidst all the tensions around these controversies Smith’s trip to India points towards a lot of healing that is needed. Before Smith’s trip, Pinkett Smith revealed the family is focusing on deep healing.

Rock’s mom addressed the slap recently. “You reacted to your wife giving you the side-eye, and you went and made her day because she was mulled over laughing when it happened”.  Rose was watching the Oscars at home and initially thought that the moment was staged. However, when Smith began to use “obscenities,” she knew it was real. “When he slapped Chris, he slapped all of us. He really slapped me,” Rose added.

She also hopes that Smith finds peace and heals as she addresses the Slap obscene and lashes out on Smith.  Like her, many fans want Smith to heal faster and hope he meditates under Sadhguru’s guidance.