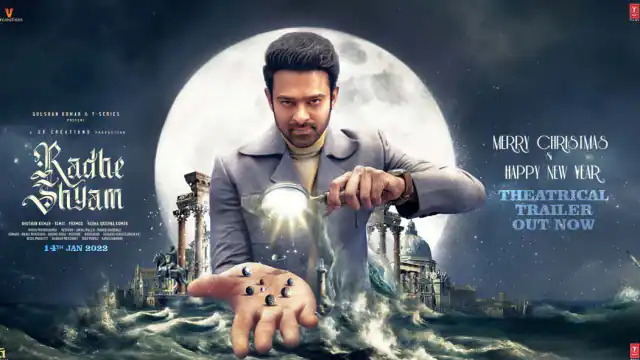 Hyderabad : Prabhas and Pooja Hegde-starrer ‘Radhe Shyam’ is slated for its release on January 14. The makers unveiled the theatrical trailer on Friday.

Promising to be an epic love story, the trailer has been released, leaving the viewers, with hints related to the romance and the twists in the saga of the couple.

Emoting a sleek love story, the trailer, which currently has 11 million views in Hindi and Telugu languages on Youtube, has grabbed the attention of all with the extravagant visuals and emotions, with a classy touch.

Apart from various landscapes and exotic international locations, the theatrical trailer of ‘Radhe Shyam’ showcases the beautiful chemistry between the lead pair.

Prabhas’ role as a palmist and a mysterious lover boy, conveys the uniqueness in the storyline. In addition to revealing the intriguing ride in the store, it has built audience anticipation even further.

With the release of the ‘Radhe Shyam’ trailer, it is clear that the audience is to experience a technically top-notch movie, with well-polished production values and an epic love story.

With only a couple of weeks away from the release the pan-India movie is to be released in multiple languages.

‘Radhe Shyam’ is a UV Creations production, presented by Gulshan Kumar and T-Series. Directed by Radha Krishna Kumar and edited by Kotagiri Venkateswara Rao. The film is produced by Bhushan Kumar, Vamsi, and Pramod.