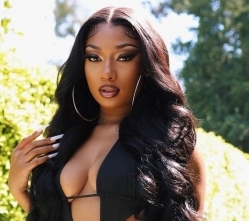 Los Angeles, American rapper & artist, Megan Thee Stallion sat down with Gayle King on CBS This Morning to discuss the 2020 incident in Los Angeles that left her foot injured by two gun shots.

Megan has claimed publicly that Lanez shot her in the feet after an argument following a party at Kylie Jenner’s house in July 2020. But it has never been fully explained and a court case is ongoing.

Megan has slowly revealed details on social media and in interviews; while Lanez has vaguely denied it in statements and in several songs.

But according to a preview clip of the interview with Gayle King that airs on Monday, Megan tearfully discussed the issue on television with her for the first time.

Megan repeats her claim that Lanez yelled “Dance, b***h!” as he shot at her feet, reports ‘Variety’.

Lanez was arrested in connection with the incident and later was arrested again for reportedly violating court orders from contacting her; he posted bail in both cases.

She has claimed that he offered to pay her in exchange for keeping quiet about the incident.

Megan unveiled a new song called ‘Plan B’ that apparently addresses the incident during her performances at the Coachella festival over the past two weekends.

The next court hearing is scheduled for September