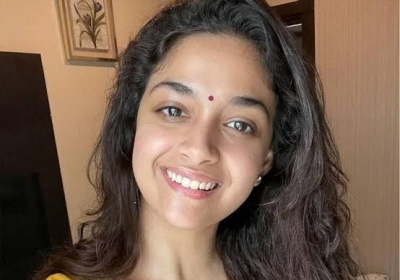 Chennai, Known for her bubbly roles in romantic stories, Keerthy Suresh first made waves when she played iconic yesteryears actress Savitri in ‘Mahanati’. Widely applauded for her performance in ‘Mahanati’, Keerthy won the national film award for this role.

The intense movie revolves around Ponni, a constable who lives with her five-year-old daughter Dhanna and husband Maari, who works as a coolie in a rice mill. In one unfortunate night, she loses everything. To avenge the injustice done to her, she takes support of Sangaiah (Selvaraghavan), with whom she shares a bitter past.

Keerthy Suresh shared her experience of working in ‘Saani Kaayidham’, and more.

Excerpts from the interview:

Q: How did this role come about? Was it written with you in mind or is it the other way round?

A: I actually don’t know if Arun actually had me in mind when he wrote the script. But I think in one of the interviews, he recently said he did. I’m not sure about that. But he came and narrated the script to me. When he narrated, I had no clue about how the film was going to be or what genre it is. So it was just a blank narration that I had. It was blind. It was only after I started listening that I understood where this was going. As soon as I finished listening, I loved it. But I also had my doubts about the film because it wasn’t something in my zone. That’s something that I usually do. So it was a complete contrast to that. So my first question was, why me and to that, he said, he wanted me because this is something that I’ve not done before and he would like to see me in a role like that. So I think that’s how he wrote the role. So that’s how it started and I thought when the director himself is so confident about me doing it, so I thought I should definitely try my chance doing this.

Q: What were the doubts that crept into your mind when you were offered an intense and deglamorised role?

A: No, for me, de-glam is not the issue at all. Like I don’t care about the de-glam at all. I love doing such roles because I think it connects a lot more with a wider range of audiences. In fact, so de-glam wasn’t my issue. My doubts were about doing a very intense character like this and it involves a lot of violence and all that. So, my doubts were mainly on the intensity of it, nothing to do with de-glam.

I love doing de-glam stuff. In fact, it takes like 20 minutes for me to get ready in the morning compared to the other films where I need like two, two and a half hours. So it’s even more interesting. So I love doing the de-glam it was just my concern on the intensity, but the minute I saw the responses for the teaser and the trailer, which is amazing, I then thought there’s nothing to worry about and actually showed the film to few friends of mine and my family and they were raving about it too. They loved it. So we forgot about the violence and intensity. All the thought was that the emotional connection was great. They got hooked on the character Ponni. And I felt like everybody who watched it with me felt like they were travelling along with that character. So I think now I really have nothing to worry about.

Q: Didn’t you feel you were taking a risk by accepting such a role at this point in your career?

A: Definitely it is a risk. This is an experiment for me because, like you said, I have not done this before. We are at two risk factors here. one, as I told you earlier, it’s about the intensity, how intense it is. The second one is that, how am I going to pull this off? Like will I be able to carry this character? Right, because I’ve not done this before, so I can’t do something where this is a very strong bold character. Because of my previous image that I have, I should be very convincing to the audience also, right. So I have to pull it off. I have to pull off the character I have to carry it in such a way that they accept me like, so that is also a risk factor. So that’s why the minute I saw the responses for the trailer I thought okay, I think I have done it right.

Q: How much of a challenge was it to portray this role and how did you prepare for it?

A: Well, honestly not. Not a lot of preparation or not a lot of challenges. Also, I loved doing this character. It was definitely not in my zone. But it took a while to get into the shoes of this character. But once I started, I was just going in the flow and even preparations, the director he actually sent me a couple of videos, say from some news channels were women from such villages which we portray in the film, how they react, how they emote, basically, and a few snippets from few English films where to show the intensity of violence, how to handle that. So these were just a couple of videos he sent me for me to observe and understand the mood of it, not that he wanted me to do a particular reaction that they follow in that particular video or, you know, copy that or do anything similar, nothing of that sort. But just to understand more of it, he sent me some videos I saw that. That’s all, otherwise all that he wanted me to do was just be lean and mean. He keeps saying this often I want you lean and mean throughout the film. So that you know, I had to make sure that I was lean and mean throughout the film so I had to maintain. So that was the only preparation.

Q: How did it feel sharing screen space with Selvaraghavan?

A: It is amazing. We all know him as a director and I saw him as an actor over there. But I saw him only as an actor. There are no traits of being a director because he is over there. He wasn’t talking about the direction or angles or frames or lights or nothing. All he used to do was just finish his shots and come watch the monitor. He will ask Arun if it’s okay? okay, it’s okay if not, yes, we will do it. And I was observing his acting, he has great skills and acting. I love his mannerisms and nuances which were very interesting. And I think I learned a lot from him. It was great working with them and I’m so happy that his debut in acting started with me. So I can I can proudly say that.

Q: As someone who has handled roles ranging from bubbly to sauve and serious (mahanati), what is it that you look for when accepting a role? Do you decide by yourself or do you consult anyone?

A: Usually I do the decision making, I take care of my own choices. But in case if I get stuck somewhere then I take opinions from my friends, as in my team so I discussed with them but generally, I listen to the scripts. I do it all by myself and talking about what I look like in a role, you see it as a whole film, not just a character. A character in the film is definitely important. But apart from that how the story is how the character is? Who is the director? what he has done before if he’s not done before, what is his style? What is his forte? And what kind of a genre is it and how different is it going to be from what I’ve done before. So a lot of questions keep running in my mind and as soon as you listen to a script and if it hits you like, suddenly there’s okay this is a really good script then that means, you know, it works for me. So then I have some doubts about it. Then I’ll discuss it with my team. But yeah, It’s not just one thing that you see in a script that’s all what I’m trying to say. It’s just not about the character but I think as a whole it’s like a package. So I think you need to look into every tiny detail.

Q: What are your personal takeaways from ‘Saani Kaayidham’?

A: Personal takeaways, I think the whole working experience. I love working with the team and I said I definitely want to do another film with the same team because I love that much. And definitely I’m flicking that saree that I wore in the film has a memory because it was there throughout in the film and yeah, I think a lot of memories, a lot of nice things to cherish. Knew a lot of people working with this new team. This whole experience was amazing. So yeah.