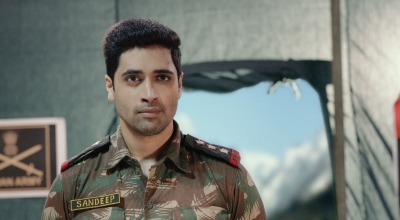 Mumbai, Adivi, who is seen as Major Sandeep, is excited with the response he is getting after the launch of the trailer. He says he has put all his effort to do justice to the character he is playing in the film.

Telugu actor Adivi Sesh is making his Bollywood debut with the movie ‘Major’. The makers of the movie recently unveiled its trailer. It is based on the life Major Sandeep Unnikrishnan and his sacrifice in the 26/11 Mumbai terror attacks.

Adivi says: “I’m thrilled and so excited with all the positive reviews and love coming my way for ‘Major’. It’s an honour to be playing such a brave and valiant character and a national hero in this all Indian film.”

“I hope to do justice to Major Sandeep Unnikrishnan’s memory and hope to bring his inspirational story to the big screen and to people across the country,” he adds.