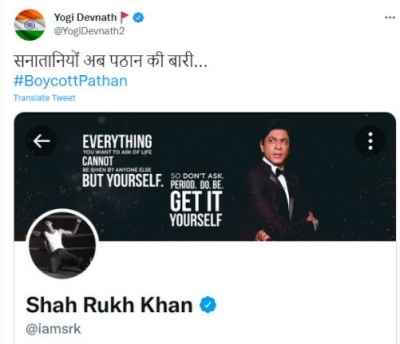 Sadhu Devnath, the guru brother of Uttar Pradesh Chief Minister Yogi Adityanath, will soon file a criminal complaint against the person who threatened him on social media in Bachau police station.

During the interaction with a local media, Sadhu Devnath stated, “One Saleem Ali (SRK fan) has posted a beheaded poster of mine on Twitter. He is from Shah Rukh Khan’s PR team, this is in reaction to my Thursday’s tweet in which I had appealed to Sanatanis to boycott Shah Rukh’s new movie ‘Pathaan’ like Aamir Khan’s ‘Laal Singh Chaddha’.”

He further clarified his stand by making it clear that he is not against any caste, creed or community, but will not tolerate those who speak against the nation and its people.
He said, “I am not against any movie, but against actors who flourish on Indian fan followers and abuse the nation”.

To note, Pathaan will mark Shahrukh Khan’s return on big screen after a hiatus of four years. Apart from this, he also has Atlee’s Jawan and Rajkumar Hirani’s Dunki in his pipeline.