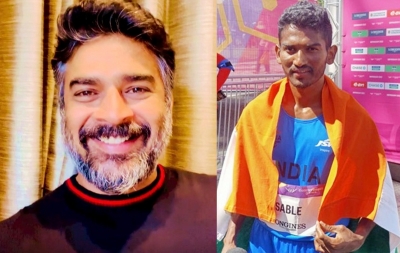 Chennai,  On Monday, Actor R. Madhavan joined several others from across the country in congratulating Indian athelete Avinash Mukund Sable, who ended the dominance of Kenyan athletes in the 3000m steeplechase event by winning the hotly contested track and field event at the Commonwealth Games in Birmingham.

Taking to Twitter, Madhavan said, “Avinash Mukund Sable! When a silver is way more valuable than many golds. What a race… What an athlete… India is catching up people. Watch out!”

Madhavan wasn’t the only one who was impressed by the fantastic achievement of Sable.

He wrote in Tamil: “Congratulations and love to Avinash Mukund Sable who has enabled us to hold our heads high on the world stage.”

Sable’s achievement is significant because the Kenyans have for long maintained absolute dominance in the event, often winning all three medals — the gold, silver and bronze.

Even at the start of the race, nobody fancied Sable’s chances but he displayed great athletic skills to finish the race second, losing the gold only by a whisker.