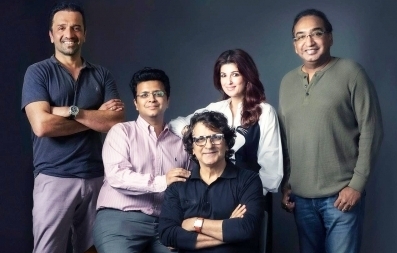 Mumbai, The film is an adaption of Twinkle Khanna’s short story ‘Salaam Noni Appa’, from her bestselling book “The Legend of Lakshmi Prasad” and marks the directional debut of leading ad-man Sonal Dabral.

Director Sonal Dabral says, “A progressive sensitive story full of wit and observational humour, a hallmark of Twinkle Khanna. And producer like Applause and Ellipsis who have made a habit of creating some fresh, outstanding work.

The ad filmmaker added: “I couldn’t have asked for a better debut as a feature film director. I’m looking forward to bringing this story to life in a way that will not only inspire people, but also be loved by all.”

Talking about the story’s journey, Twinkle said: “‘Salaam Noni Appa’, from my second book, is loosely based on the relationship between my grandmother and her sister. It was first adapted into a lovely play.” The play had Lillette Dubey in the lead.

Incidentally, another story from the anthology, ‘The Sanitary Man of Sacred Land’, was made into the much-celebrated film, ‘Pad Man’, by R. Balki. Twinkle’s husband, Bollywood superstar Akshay Kumar, played the principal character in the film.

In a joint statement, producers Tanuj Garg and Atul Kasbekar of Ellipsis Entertainment promised that the film “will leave you with a warm, fuzzy feeling.”

They added: “In line with our track record of identifying the best directorial talent from advertising, we’re delighted to have leading ad-man Sonal Dabral helm the film.”