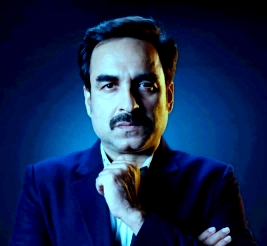 Based on a true occurrence that happened in India’s Pilibhit Forest Reserve. It brings attention to the negative impacts of urbanisation, man-animal conflict, and poverty, which resulted in a strange habit in a community.

Sherdil is the story of a guy named Gangaram who is willing to give up his life and succumb to Tiger so that his villagers may afford a two-square dinner. He enters the trees one lovely day and waits for his end. In this quest, he meets Jim, a poacher played by Neeraj Kabi, and is drawn into a legal trap. What happens next is a chain of unparalleled occurrences.

Review:
Director Shrijit Mukherji works hard to bring this man’s story to life, which many of us are unaware of. Based on his earlier work, such as Begum Jaan, one has great hopes for him. However, Sherdil: The Pilibhit Saga suffers from amateur execution, which undermines the performance of an actor like Pankaj Tripathi. The film lacked the necessary emotional depth since it focused on Gangaram’s solution of forcefully accepting to give his life rather than the challenges as a whole that they are willing to tackle.The crowded storyline and shaky execution that such a suspenseful topic yielded had us all squirming in our seats.

The duration of 135 minutes gets a bit dragged and things seem half-baked and subplots are not comprehended well.

The film takes its sweet time to build up which makes the first half a boring watch. In the second half, there are some witty one-liners that manage to chuckle you up. But, it’s the climax that is hard-hitting.

Talking about other technical aspects of the film, Right from the eerie silence of the jungle to the flora and fauna, Tiyash Sen’s camera work is top-notch and creates the perfect ambience which is required for the film. On the flip side, the film could have been much tighter if the editing scissors were a bit sharper. The background score takes the storyline forward convincingly. Among the songs, Aadmi Bhutiya hai has the potential to make it to the playlist. Rest are passable.

When it comes to performances, Pankaj Tripathi’s bang-on act is the only saving grace in the film. The actor packs a punch in the second half with the way he mouths witty one-liners. Also, the way he pesters his wife or addresses villagers, his expressions are on-point.

Sayani Gupta as his wife has limited screen time and her act is passable. The actress is good only when it comes to portraying glamorous characters. Her scenes with Pankaj Tripathi lack the required spark. Also when she mouths the dialogues, she failed to get the accent right which in turn seemed like she is trying hard to rant.
Neeraj Kabi as the poacher too had a little to do. He could not gracefully take the story forward.

Final verdict:
The film attempts to touch the audience’s emotions but falls flat. If you are a die-hard Pankaj Tripathi fan, you will enjoy this film. Otherwise, because the picture lacks the capacity to draw audiences to theatres, putting it on OTT might be a good alternative.