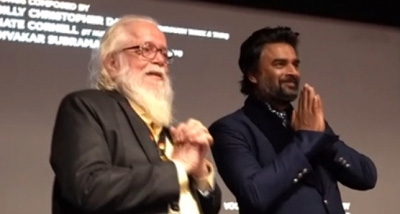 The film is based on the story of Nambi Narayanan, an ISRO scientist who was detained in 1994 after being accused of being a spy.

The 2022 Indian biographical drama film Rocketry: The Nambi Effect is based on the biography of Nambi Narayanan, a former aerospace engineer and scientist with the Indian Space Research Organization who was wrongfully convicted of espionage.

The film, which is based on a true story, aims to bring up a significant subject.

R Madhavan performed three roles in the film—director, writer, and main character—and he unquestionably nailed each one with his superb performance.

Nevertheless, the entire film was fantastic. The segment of the movie where the case started was one of the most difficult to watch. While it is true that the actual torture and brutality the Narayanan family endured was probably worse, the goal of a feature film is to make the story acceptable enough.

Even so, it doesn’t significantly alter the watching experience as a whole.

It was not surprising to see R Madhavan perform well because he is such a fantastic performer. What was pleasing to the eyes was the supporting cast’s performance. From the wife to the colleague, each character was crucial in touching the viewers’ emotional core.

Technically speaking, there was nothing to point out. Due of the overuse of machinery and technical issues, the film required precise editing, which was done well. Other than that, only closeups and necessary pans were used.

The first half of the film was a little slow and jargon-heavy, but the second half unquestionably picks up. Despite having a lengthy running duration, the movie seems to have the ability to affect many people’s lives.

It was meant to be a delight to see Shah Rukh Khan on screen after four long year. To be honest, the cameo wasn’t just a blink-and-miss appearance; rather, it was a full-fledged cameo.
The actor even had to act and express himself on several occasions, which he did with complete sincerity.

This flick is definitely a content heavy picture that has a powerful message, which has been presented and conveyed effectively.