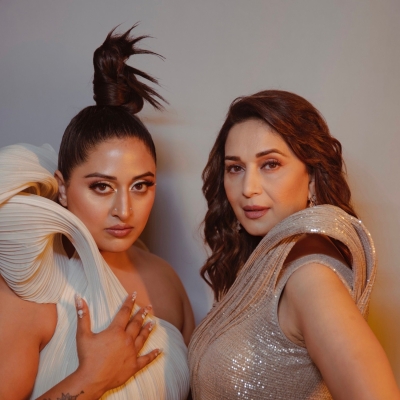 Mumbai, Madhuri Dixit has teamed up with Raja Kumari, an Indo-American rapper, songwriter, and performer, to create the song “Made In India,” which was created in collaboration with a Shoe brand.

“Having lived in the USA for a few years, I completely resonate with the sentiments with which Raja Kumari created Made In India. It is an anthem for every Indian born in and outside of the country. It is truly exciting to have united with such a feisty artist for a song that envelopes the spirit of India,” said Madhuri.

Raja Kumari and Madhuri feature in the next song in ultra glamorous ensembles that highlight the story of local labels curating aesthetics.

The upcoming anthem, sung and written by Raja Kumari as an interpolation of Alisha Chinai’s “Made in India,” is a tribute to the original song, which inspired her as a child. The hip hop artist proudly claims her Indian background in the song, and she encourages Indians all across the world to do the same.

Raja Kumari adds, “Madhuri is the ultimate queen of expression and a dance icon. I’ve admired her inspiring work and it feels surreal that we’ve collaborated for my dream project ‘Made In India’.

“She’s one of the few Bollywood celebrities who owns her Indianness no matter where she goes. Our song also features young girls in different cultural attires. I believe we can show a more complete view of the Indian women of the new India. I’m excited that Madhuri powered this vision.”

On May 6, ‘Made In India’ will be launched. The song will be released as part of an EP that will be announced shortly.