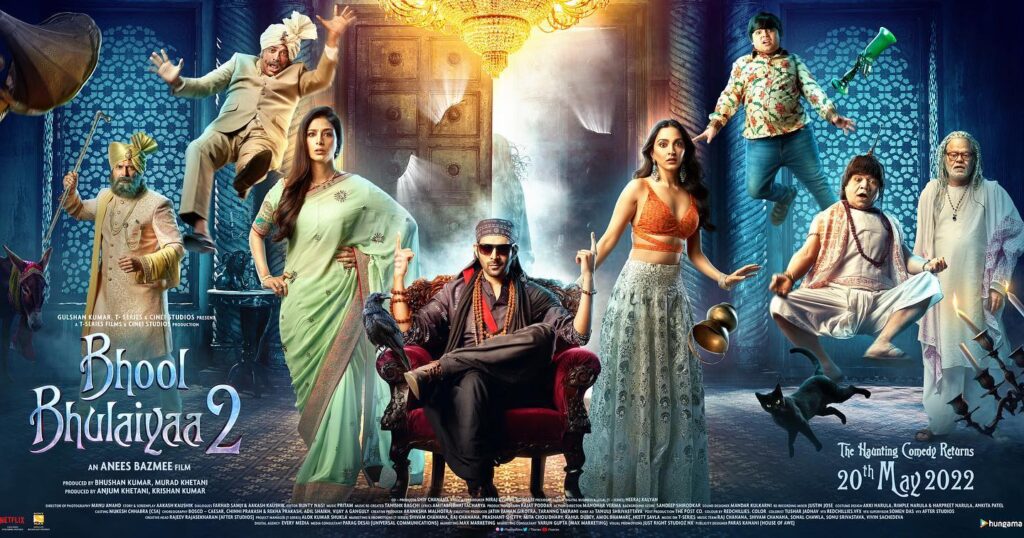 Mumbai, Fans of Kartik Aaryan and Kiara Advani were in for a treat today. After all, the trailer for their eagerly anticipated horror-comedy Bhool Bhulaiyaa 2 will be released today. While the anticipation for the film is high, Kiara has taken to social media with a new poster for Bhool Bhulaiyaa, which she uploaded two hours before the trailer’s release. Apart from Kartik and Kiara, Tabu will also play a significant role in the film.
Kartik, Kiara, and Tabu, as well as other movie co-stars, were included on the poster. Kartik was fully dressed for his job in a black kurta pajama, while Kiara looked lovely in an orange top with a white skirt. Her face was filled with a terrified expression. Tabu, on the other hand, wore her pistachio-colored saree with panache.
Kiara captioned the photo “It’s almost time for the haunted haveli to re-open its doors! #BhoolBhulaiyaa2 trailer premiering at 1 PM! Watch the family entertainer, releasing in cinemas on 20th May 2022!”
Take a look at this post by Kiara Advani:
It’s important to note that the new release is the sequel of Akshay Kumar’s 2007 film Bhool Bhulaiyaa. Kartik’s first collaboration with Tabu and Kiara will be in the Anees Bazmee-directed film. The makers had previously released tantalizing first look posters of Kaira and Tabu, leaving the public wanting more.