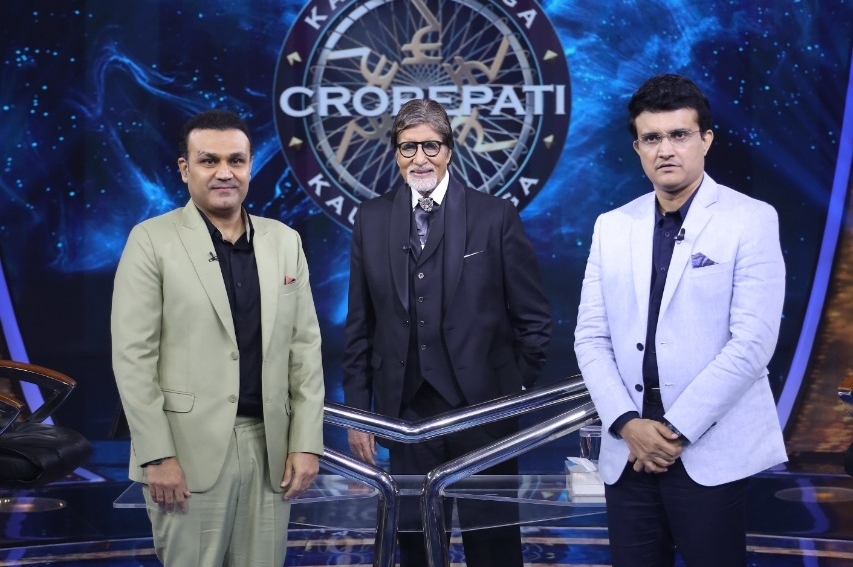 Mumbai : Cricketers Sourav Ganguly and Virender Sehwag will be the special guests on ‘Kaun Banega Crorepati 13’ this Friday. On the ‘Shaandaar Shukravaar’ episode, the cricket legends will be seen playing along with host Amitabh Bachchan.

During an interaction, when asked about creating various strategies on field and matching it up to strategies to win the maximum amount from the show, Ganguly shared: “We’ve planned a lot of strategies but we were nervous. Because for years, I was on the other side and now I’m on this side. And now that I am on this side, I know how difficult it is.”

He continued to say: “When we won the Natwest Trophy in 2002, Sehwag and I used to open and went to bat and had to make 325 runs so I told Sehwag that now it is going to be 15 overs when the fielders are going to be inside so don’t hit it so much and he agreed. The first strike they put, he (Sehwag) hit a mid-off four. I told him ‘See, Veeru in the first ball we got 4 runs, now you continue to play singles, we’ll have an 8 in the over so we’ll be steady with the run rate. And he agreed.”

Sourav shared further: “The next ball came and he again took a mid-off shot. The third ball, he again hit a four and then I didn’t go to him. In 6 balls, he hit 5 fours. Fourth was a sweep and fifth he hit through the third man and he would’ve hit the sixth also but he must’ve felt pity for me.”

Adding to this, Virender Sehwag said: “He was the captain, whatever he said, we just blindly followed it.” Responding to this, Sourav Ganguly added: “I just gave you an example of that. There are many stories which I will share.”

The winning amount will be used for social causes.