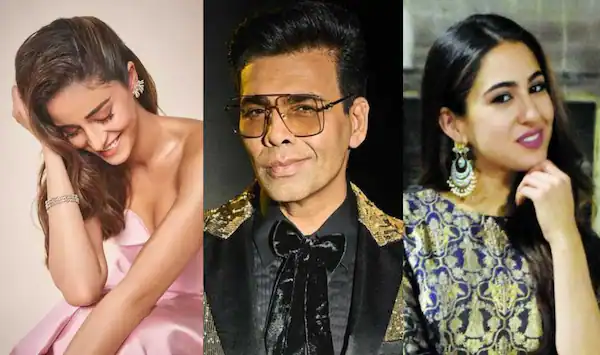 Karan Johar gets along well with artists from every generation in the fraternity. His social media posts dedicated to Alia Bhatt speak volumes of his affection for her. But, he also shares an adorable bond with Sara Ali Khan and Ananya Panday among other Gen-Z stars as well. Both even appeared on the couch of his talk show where they spilled some beans about their personal lives.

In a recent interview, filmmaker Karan Johar was asked to predict something about both the star kids based on what he knows about them from their personal equation.

When asked about Sara, filmmaker ended up confirming that Sara will be collaborating with him on 2 films. He said,
“Sara Ali Khan is gonna do an amazing film with me, which I’m producing, which is gonna be for Amazon and we are very excited. And there’s one more film that she will do for us, for which I’m also very excited. That’s her future related to me. I don’t know anything else that’s happening in her personal life.”

Additionally, Karan hinted in the same conversation that Ananya Panday would soon be dating. He said,
“Ananya Panday is going to date somebody soon I think. I don’t know who.”

To recall, when Ananya came on Koffee With Karan, Karan revealed that at his birthday party, she and Aditya Roy Kapur were dancing away. He hinted at them bonding well.

On the work front, Karan Johar is all set to wear the director’s hat after six years with Rocky aur Rani ki Prem Kahani.