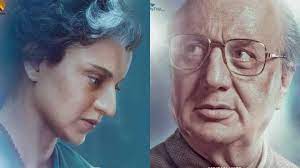 After Manikarnika: The Queen Of Jhansi, Kangana Ranaut is all set to take the director’s chair once again for her upcoming film Emergency which is based on the life of former Indian Prime Minister Indira Gandhi.

Sharing the poster, Kangana Ranaut wrote, “If there is darkness there is light if there is Indira there is JayaPrakash …. Presenting @anupampkher as the people’s hero, Lok Nayak JayaPrakash Narayan. #Emergency.” Anupam Kher reacted to the post and wrote, “Thank you for offering me this great role of #JayaPrakashNarayan. Jai Ho!”

Expressing his excitement to essay this role, Anupam Kher also shared the poster on his social media handle and wrote, “BIG: Happy and proud to essay the role of the man who questioned fearlessly, a rebel in the truest
sense of the word, #JayaPrakashNarayan in
@kanganaranaut starrer and directorial next #Emergency. My 527th! Jai Ho! #JP #Loknayak”.

On the work front, Anupam Kher concluded the shooting of his upcoming film Uunchai with legendary actors Amitabh Bachchan, Boman Irani and Neena Gupta. Apart from this, he also announced the title for his upcoming flix, The Signature alongside Mahima Chaudhry. Meanwhile, Kangana Ranaut’s other upcoming projects include Tejas and the sequel to Manikarnika. She is also producing Tiku Weds Sheru under her banner.