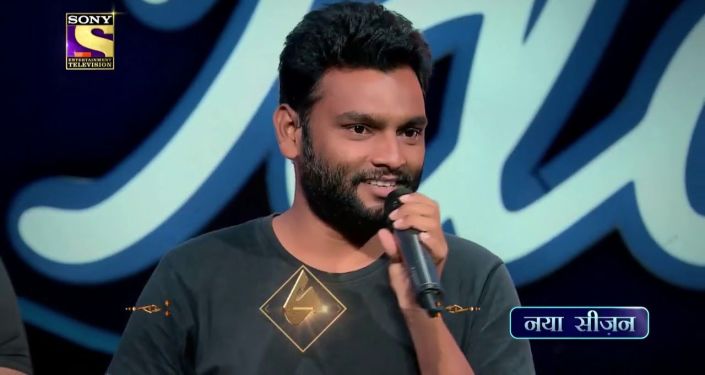 New Delhi : A video of Yuvraj Medhe giving an audition on Indian Idol 12 has gone viral, not only for his singing skills but also for his back story. Ahead of its premiere on November 28, Sony Entertainment Television, channel that airs the show, tweeted a promo featuring Yuvraj. In the video, the 26-year-old from Maharashtra impresses the judges Neha Kakkar, Himesh Reshammiya and Vishal Dadlani with his talent, and also makes them emotional with his life story. Yuvraj has long been associated with the singing-based reality show, not as a performer but as a sweeper and someone who helps in setting up the stage.

“I have been working on the set of ‘Indian Idol’ for the past three to four years. My friends were working there. I did sweeping and helped in setting up the place,” he said. His interest in music goes back to his childhood days but he didn’t have the courage to make it to the stage. “I didn’t have the confidence to participate in the show earlier and showcase my talent. I used to make my friends listen to my songs. They would like my voice and they encouraged me to participate. They said ‘if a shoe shiner can come here and win, then you can do it too’,” he said referring to previous season’s winner Sunny Hindustani.

“I never thought that I would get an opportunity to sing on such a big platform. I am very happy. People are calling me up and sending messages. My parents are also very happy,” said Yuvraj, whose father works as a labourer in Jalgaon, Maharashtra. Talking about his singing journey on the show so far, Yuvraj, who has also worked on sets of shows such as “Superstar Singer” and “Bigg Boss”, said: “I got the golden ticket in the first round. There are lots of talented singers here. All are masters in singing. I learn a lot from them.”

This is the first time that he is participating in a show, but he already has some experience in music. “My Marathi album titled ‘Saanjh’ had released a few months ago. It is available online and the songs were also aired on Marathi channels,” he said. So now, is he going to put all his effort solely in music? “I want to focus on music, but it is also important to work, as the financial condition at home isn’t good. Two of my brothers are still studying,” he said.

For now, he is just happy with all the love he is getting from audiences and judges. “The judges were very happy that a person from the set was standing in front of them. They got emotional too, and praised me a lot. People have also started following me on Instagram. I had started with just 50 followers, but after the promo it has increased to 200,” said Yuvraj.