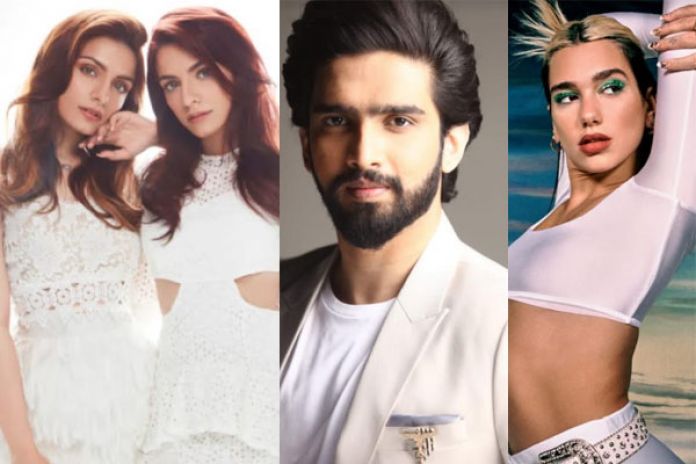 Amaal Mallik has recruited twin sisters Prakriti Kakar and Sukriti Kakar to lend their vocals to the funk-driven song, and has used traditional Indian elements such as the North-Indian ‘tumbi’ to give it a desi twist. It’s a first-of-its-kind collab between Indian and international pop stars, and fans around the world are delighted with this new rendition of ‘Levitating’.

Speaking about this release, Dua Lipa said “I am so thrilled with the response from my Indian fans to ‘Future Nostalgia’. I had an amazing time in India in 2019, and so I always wanted to do something special for them. The Indian music icon Amaal Mallik has remixed the track, adding his touch with beautiful Indian instruments. This is my gift to my Indian fans, and I hope you all will love the remix as much as I do.”

It is a tremendous feeling to be collaborating with such a talented pop star and global icon! Dua Lipa’s music is something we all love, hence it’s quite an honour for me to be doing the official India remix, giving an Indian touch to one of her biggest tracks. Prakriti Kakar, Sukriti Kakar, Kunaal Vermaa and I feel elated to be coming together to remix Levitating, one of the standout songs on the ‘Future Nostalgia’ album! Congratulations are in order for Dua on her Grammy win, and I think it’s the best time to be dropping this track of ours. I look forward to the reception.

Dua Lipa was the reason I wrote my first single in 2019. I’ve been following her work so closely since the very beginning. We’ve been so inspired by her work for as long as I can remember.

Levitating has been literally everywhere, and everyone knows it word for word. We’ve made an Indian version of the song, and I can’t wait to share it with the world!

I’m so excited that I got to do this with my twin sister Prakriti, as well as Amaal Malik who produced the remix and gave it a desi touch, as we all have been long-time fans of Dua and her world of music!

Collaborating with Dua Lipa is nothing short of a dream for us. We have always been her fan from her first few songs, and today, when she is one of the most streamed artists in the world, we still don’t miss a single song or performance. She’s also one of the biggest inspirations behind our songwriting career.
To have sung on a remix of her massive hit ‘Levitating’ is both an honour and a responsibility for us. I hope people enjoy our Indian take on the song. Amaal Mallik has produced this official remix, giving it a whole new approach! We hope people enjoy this one just as much as they’ve enjoyed the original song.

Since the release of her first single in 2015, Dua Lipa has become one of the music world’s hottest young artists. Her eponymous debut album has eclipsed 5 million sales worldwide, with single sales reaching 80 million and the video for her break-out hit “New Rules” (“the song that changed my life,” she says), made her the youngest female solo artist to reach one billion views on YouTube. She made BRIT Award history in 2018 as the first female artist to pick up five nominations, with two wins for British Breakthrough Act and British Female Solo Artist. She then went on to receive two Grammy awards for Best New Artist and Best Dance Recording for “Electricity,” her collaboration with Silk City the following year. At the end of 2019, Dua performed her Number 1 global hit single ‘Don’t Start Now’ at the MTV EMAs, ARIAs, MAMA’s and AMA’s in the lead up to the release of her latest album, Future Nostalgia. Her sophomore record was released in March 2020 and surpassed 294 million streams in its first week and has reached 3 million global sales, exceeded 6 billion streams across all of its tracks and has just been certified platinum in the UK. To celebrate the release, Dua performed a star-studded livestream version of the album called ‘Studio 2054’ which broke records for global livestream sales after attracting millions of viewers worldwide. This year Dua added a 3rd Grammy win for Best Pop Vocal album for ‘Future Nostalgia’ and also holds the record for the most streamed album in a single day by any British female artist. Dua is the most listened to British artist on Spotify globally and the most listened to female artist on the platform. She has also had the longest run of 3 tracks in the top 10 by a female artist since 1955 and the album has spent 28 weeks in the top 10 since its release.

30 year old Amaal Mallik, son of Music Composer Daboo Malik, is one of the youngest, most successful music composers in India. He is the youngest composer to have won the Dadasaheb Phalke Award, his 2nd Filmfare Award in 2019 and has won the IIFA Award 3 times.

Recently Mallik collaborated with the legendary international band U2 for a reprise version of their track Beautiful Day. He is the second, only Indian composer to have performed live with the Melbourne Symphony Orchestra, after the legendary AR Rahman.