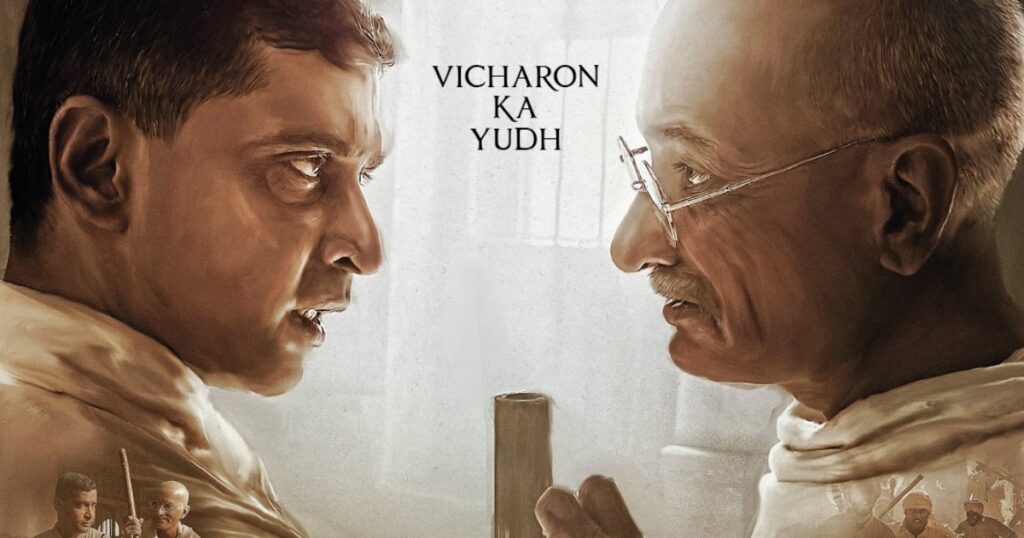 A film about how two ideologies can be diametrically opposed while still being correct. It is the story of Gandhi and Godse, and it attempts to present both of their points of view.

A film based on an alternate story of Gandhi surviving Godse’s attack and their conversation in prison is a sincere attempt to present two opposing but justifiable viewpoints.

According to reports, Gandhi Godse Ek Yudh is set in 1947 and 1948 and is an adaptation of Asghar Wajahat’s play about communal issues, cultural assimilation, democracy, and development.

The film begins with flashes of historical footage to maintain its authenticity and to allow the audience to feel the vibe of the film. As soon as the videos end, the director provides an overview of what is going on by showing riots following the India-Pakistan split.

The movie mentions a lot of incidents over the course of two hours, making it a Khichdi that is not well served.

When it comes to the cast, the film lacks a mainstream superstar; instead, Rajkumar Santoshi cast two theatre actors as Gandhi and Godse, respectively.

Tanisha Santoshi and Anuj Saini make their film debut as well. Their characters appear to have no value and add nothing to the story. These two look like forced characters who have proven to be a huge mismatch.

Chinmay Mandlekar, who plays Godse in the film, shows promise, but his efforts fall short of saving the drowning screenplay.
Speaking of Deepak Antani, the man who plays Gandhi looks like him but falls short due to a lack of effort.

Moving on to the technicalities and editing, the camera placement looks good, but the script needs major revisions because the plot appears boring, slow paced, and lethargic.

When it comes to the song, the team has used classics that the audience enjoys. Which helps the movie become palatable.

Rajkumar Santoshi is known for his story telling but sadly here, he fails to do what he does the best and it is disheartening to see that.

This film attempts to present a very different ideology, but it falls short of delivering its own vision. Hence, you will not regret missing this film.