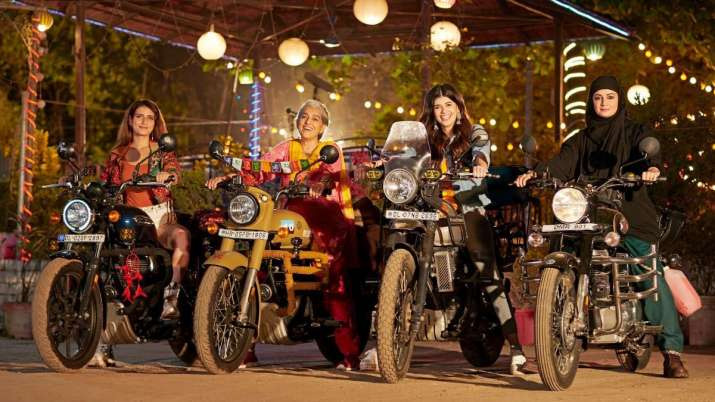 For the first time in the history of Indian Cinema a full unit rode to the highest motorable pass in the world to shoot a full scene with all the lead actors. Amidst all the odds like extreme weather, heavy rainfall, sandstorms and temperatures ranging from 48 degrees to -2 degrees, the team wrapped the difficult Ladakh schedule with surging emotions.

Talking about the first linear Delhi to Leh 40 days schedule, Dia Mirza said, “The most memorable instance for us as artists on this film was making it to the Khardung La pass! It holds such deep significance to each of our characters in the story and each one of us felt it. Immense gratitude for our producers, the crew and most importantly the Indian Army for making the experience smoother for us.”

Fatima Sana Sheikh on her experience, “I was the most excited about this schedule as I love going for bike rides, but this journey pushed my limits, personally and as an actor. We made it through all the ups and downs and reached Khardung La! It was an unbelievable and exhilarating experience to shoot there and by the end of it I know that I’ve learnt so much more about myself as a performer and a person.”

Speaking about the film and the shoot, Ratna Pathak Shah says “If someone had told me 6 months ago that I would be riding a bike all the way to Ladakh at 65, I would have laughed! This film has been special to me in many ways. It has forced me to face my fears, taught me to trust myself, my colleagues and my crew in stressful situations, taken me to one of the most beautiful and awe-inspiring places in the world and introduced me to some wonderful people. When a film becomes an adventure for all involved, it stops being a product and becomes an experience. The story becomes a part of us!”

Sanjana Sanghi added, “There are some moments in life that simply don’t feel real, that are just larger than life! Being on the road for weeks had been a transformational journey, culminating at the breathtaking Khardung La pass. It’s been challenging and physically grueling, yet tremendously satisfying.”

Directed by Tarun Dudeja, the adventure film is based on a female road trip adventure.