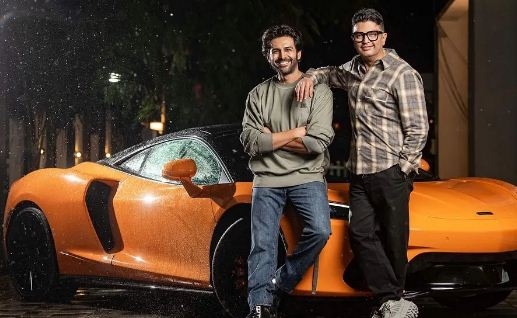 Mumbai : Kartik Aaryan has been riding the box office wave super high and is now all set to ride his swanky new sports car gifted to him by his ‘Bhool Bhulaiyaa 2’ producer Bhushan Kumar.

The GT, a posh Orange McLaren, is the first of its kind set of superwheels to be delivered in India, sources said.

The young star is known for his fondness for supercars and enjoys driving to his shoots and the airport on his own. His collection includes a Lamborghini and the Mini Cooper he gifted his mom.

From ‘Sonu Ke Titu Ki Sweety’ to the blockbuster of the year, ‘Bhool Bhulaiyaa 2’, T-Series and Kartik Aaryan have given the audiences some of the biggest successes and are all set to unite for ‘Shehzada’ too. Celebrating the historic success of their latest, Bhushan gifted the car to Kartik as a token of appreciation and gratitude.

Bhushan had said recently that his bond with Kartik Aaryan has developed the professional relationship they initially shared. The sports car is a token of appreciation to Kartiks determination, he said.

The actor recently took to his social media to mark the successful run of the film at the box office with a super fun game edit, writing, “#BhoolBhulaiyaa2 starting its UNREAL RUN of the 6th WEEK now In a Theatre near you ?? ZigZagger #RoohBaba vs
Bonecracker Manju ??”

With ‘Bhool Bhulaiyaa 2’ busy taking over OTT along with the box office, Kartik also has ‘Shehzada’, ‘Captain India’, ‘Freddy’ and Sajid Nadiadwala’s untitled next in his kitty.