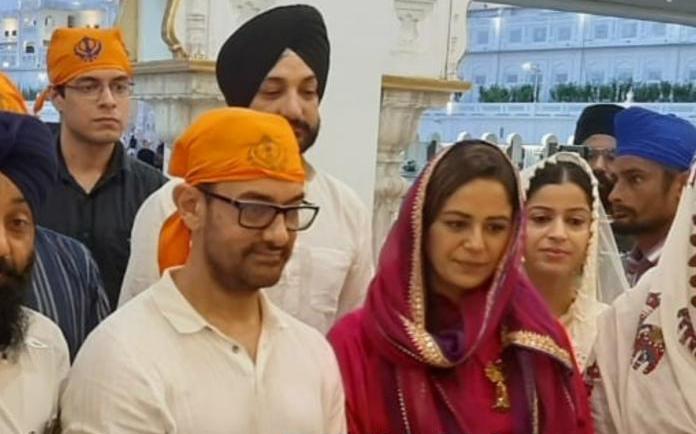 Aamir Khan, who is ecstatic about his new film Laal Singh Chaddha, took some time out of his busy promotional schedule on Wednesday to seek blessings at the Golden Temple in Amritsar, Punjab, alongside his co-star Mona Singh, who plays his mother in Laal Singh Chaddha. Kareena Kapoor Khan and South star Naga Chaitanya also star in the highly awaited flick. The film is an official Hindi remake of the 1994 Hollywood film Forrest Gump, which starred Tom Hanks.

The Taare Zameen Par actor was dressed casually in the images, while Mona was dressed in a pink traditional garb. Other devotees encircled the two as well. Aamir Khan, Naga Chaitanya, and Mona Singh had previously paid their homage to Indian war veterans at Delhi’s National War Memorial. The film is set to be released on August 11, 2022, and will compete with Akshay Kumar’s Raksha Bandhan at the box office.

Meanwhile, Aamir recently stated that Shah Rukh Khan will make a cameo appearance in Laal Singh Chaddha. He was asked by a journalist how he convinced Shah Rukh to perform a cameo, to which the actor replied, “Well Shah Rukh is a friend and I told him that I needed someone who can represent what Elvis (Presley) represented in America. I need the biggest iconic star of India, which is why I am coming to you’ (laughs). He was really sweet and he said, ‘Yes’.”

Aamir’s Laal Singh Chaddha teaser was aired at the IPL 2022 finale, and fans have been praising it on social media ever since. On the occasion of Aamir’s birthday on March 14, 2019, the film was formally announced.