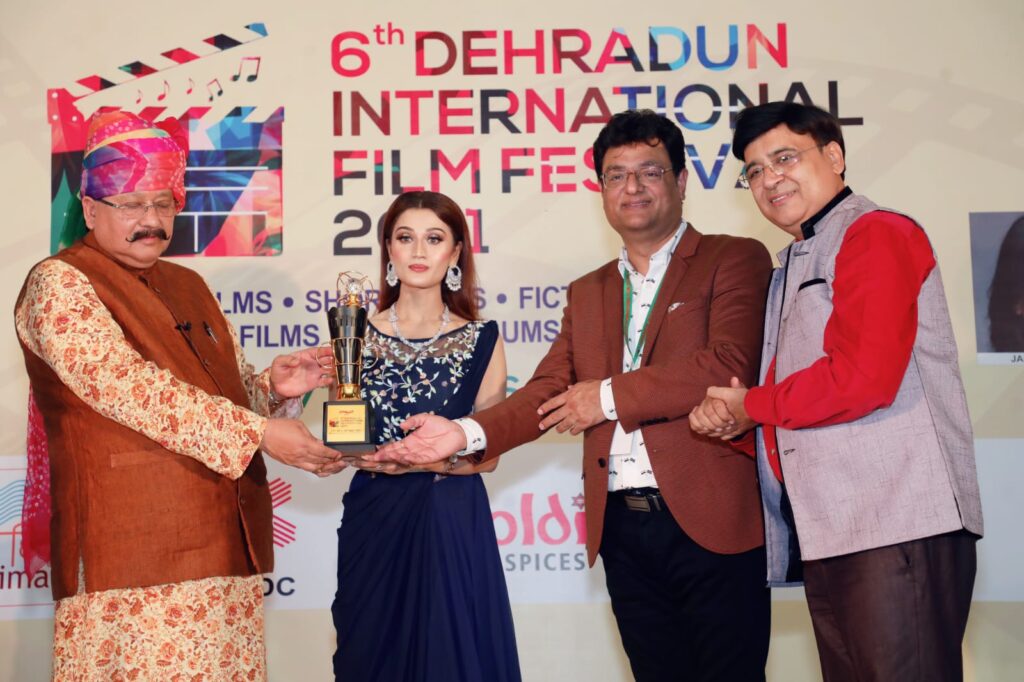 Dehradun Being from the Land of Gods Uttarakhand itself, Arushi Nishank has always received adoration from the people of Uttrakhand and her presence in the event made DIFF the biggest success of all time.

The festival showcased a wide variety of rich content and award-winning documentaries, regional films and short films. The festival was aimed at bringing the emerging talent of Uttarakhand and the renowned names of the film industry together.

Actress Arushi Nishank was awarded by Satpal Maharaj, current tourism, cultural and irrigation minister in the cabinet of Government of Uttarakhand in Dehradun International Film Festival for being a role model to many people.

Arushi Nishank, who is a well-known Khathak exponent, actress praised the efforts put in all the documentaries and films. She also shared her experiences and lessons from the film industry with audience, participants and her peers from the industry present in the event.

Apart from this Arushi Nishank is also an environmentalist and proprietor of Himshrri Films. The event was concluded with the award function to honour the winners of the short film, feature films and documentaries. The award ceremony also appreciated the contributions of all the participants.

Himshrri Films and T-Series together announced the upcoming project Tarini. Tarini is the first to embark on a maritime journey in the world, a film based on six women officers of the Navy. The production of Tarini film based on these six women navy officers is going to start soon. The project was announced on 8 March 2021, together with the Himshrri Films and T-Series. Famous film writer Prasoon Joshi has mentored the writing team of the Tarini too.

From a young age, the Kathak dancer, Arushi Nishank has performed in more than 15 countries and is making her debut with the film Tarini. Ms. Arushi Nishank has always been active when it comes to women empowerment and has taken many steps in the same direction.

She is also working in tandem with Uttrakhand Government in order to support the emerging talents of Uttrakhand region and give them a platform to showcase their talent in Bollywood.