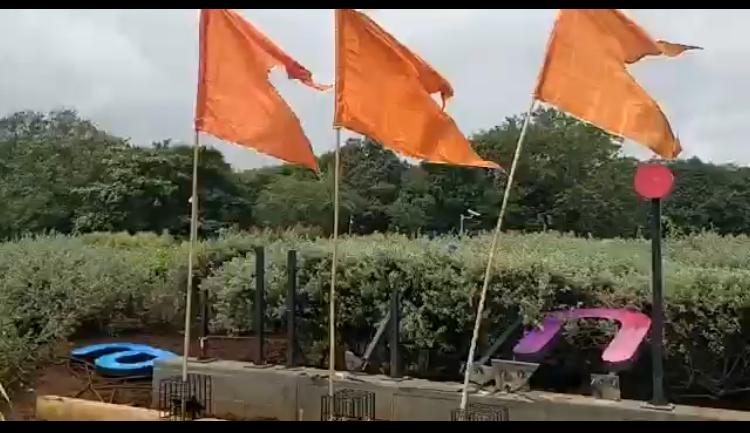 Mumbai, A group of angry, sloganeering Shiv Sainiks went on rampage to vandalise and tear down a brand new hoarding erected by the Adani Airport Holding Ltd (AAHL) outside the Chhatrapati Shivaji Maharaj International Airport (CSMIA) here on Monday afternoon.

The Sainiks, led by Bharatiya Kamgar Sena (BKS) General Secretary Sanjay Kadam and others, protested against what they alleged as AAHL’s unilateral move to abruptly ‘change’ the name of CSMIA and replace it with the Adani Group brand name.

Raising slogans of ‘Chhatrapati Shivaji Maharaj ki jai’, the Sainiks trooped onto the landscaped garden, planted saffron flags and uprooted AAHL’s new hoarding erected near the huge statue of the great Maratha warrior-king before stomping out of there.

“The AAHL has merely been permitted to manage the Mumbai Airport and they cannot make any changes to the name. This is an insult to the people of Maharashtra. We shall not tolerate this,” Kadam warned, addressing the media at the site.

Later, an AAHL spokesperson said that the company has only “replaced the previous branding with Adani Airports branding” after the company took over the country’s most prestigious airport last month.

“No change has been made to the CSMIA’s branding or positioning at the airport terminal. The branding at CSMIA is in compliance with the norms and guidelines of the Airport Authority of India Ltd,” added the spokesperson.

Lauding the BKS’ action, Shiv Sena MP from Mumbai South, Arvind Sawant, termed it as “a spontaneous reaction against an attack on Maharashtra’s pride”.

He claimed that earlier there was a small logo of the previous owners, GVK Group, beside the board of CSMIA, but that has been reversed with a large logo of Adani and a smaller version of the CSMIA.

“This cannot be allowed. Have you purchased the country? Are we your slaves,” Sawant said.

This is the second brush-off between the Adani Group and the Maha Vikas Aghadi (MVA) government of Shiv Sena-Nationalist Congress Party-Congress in the past two weeks.

In July, the MVA allies had vociferously protested a reported move by AAHL to shift the Mumbai Airport headquarters to Ahmedabad — where the Adani Group is headquartered — but the latter stoutly denied any such plans and the matter subsided.

The AAHL, which took over the Mumbai Airport in July, has assured that it would continue to adhere to all the guidelines laid out by the government in the interest of the aviation community at large.